Spending 18 collective hours watching 6 movies that are actually just telling two stories seems like a monumental misuse of time to people more keen on doing things like running marathons and gardening. Or even making more money. But I enjoyed every minute of the 18 hours (and more; considering I watched every one a few times over) of the fantasy nerd-fest movies that is the Lord of the Rings (LOTR) and Hobbit Trilogies. That is what counts right? Right?

Well, even if not; I tell you there are some awesome life lessons to learn from the movie! However, we are a money site so we sought to find the money lessons as opposed to the general life lessons – and boy, did we find them (I mean, it is 6 movies). The best bit was the re-watching of many scenes – in the name of research of course!

1. The Money Sins of Your Parents May Haunt You But You Can Change Your (Financial) Destiny

In the Fellowship of the Ring; we are shown how Bilbo’s obsession with the ring and inability to understand it’s danger being passed on as the burden that Frodo now has to carry. He apologises to Frodo for bringing the burden of the ring upon him. But as we all know, Frodo not only rises to challenge; he avoids the temptation to keep the ring and manages to destroy it.

The Money Lesson: A lot of our financial habits are learned from our parents: from their behaviour and also what they impart to us. But that doesn’t mean we need to lead the same lives or fall into the same money traps.

We can change our future no matter what we are left with – just as Frodo managed to do. In the same vein, parents can also heed the lesson to be careful what financial lessons and inheritances they leave their children. Let’s not allow our greed or mismanagement haunt our children.

2. Don’t Let a Bad Adviser Ruin Your Finances (or Any Other Big Decision)

In the second LOTR movie, The Two Towers, King Theoden was slowly poisoned by his bad adviser, Grima, a minion of evil Wizard-y Saruman. In time, Theoden lost control of his Kingdom and most everything in it because he trusted his adviser so (well, magic did play a part). Just as kings trust their political advisers; many people implicitly trust their money into the hands of personal finance advisers.

Whilst personal finance advisers are great to have when you aren’t as clued in to finance as you’d like to be; it’s important to always take an active interest in decisions made and avoid blindly following everything your adviser tells you. By and large, financial advisers aren’t evil wizard pawns looking to wage war on your bank account; but some may just not be as good at deciding the best financial move for you as you may think.

The Money Lesson: Care for your financial empire should always be, at the end of the day, based on your decisions. Your adviser is there to advise you but it’s always good to take an active role in asking questions; thinking through decisions and in the end, maintaining ultimate control. This doesn’t mean that all advisers are evil and out to ruin your finances; but in the event you are unlucky enough to land a bad apple; at least keeping an eye on things will minimise any damage done.

Or else you will be forced to hide in the shadows well after you’ve died. When Aragorn needed help in the final installment of the LOTR Trilogy; he called on the Army of the Dead (the Dead Man of Dunharrow) to help him. The Army of the Dead was cursed by Isildur for taking an oath to help him in the the fight in the War of the Last Alliance but they had abandoned him.

For not fulfilling their oath; they were cursed to live in the shadows and never know peace. The curse goes: *”…this curse I lay upon thee and thy folk; to rest never until your oath is fulfilled.”*

Sounds like what might happen to you if you miss a few loan or credit card payments.

The Money Lesson: Debts must be paid. When you take a loan or make payments on a credit card; you essentially take a ‘oath’ that you will repay the loan you have taken.

In the event you don’t; the bank is legally empowered to take every action to have the debt repaid. Choosing to abandon this promise to pay may actually see you go into hiding (and hoping you can hide in a mountain): to avoid the debt collectors and bank agents! And if you’ve ever missed even a single’s month’s payment, you know how persistent banks can be.

Whilst they can’t curse you physically for all time; they can make the rest of your existence pretty miserable especially with the threat of bankruptcy. Ever tried living with a bankruptcy status and the Director General of Insolvency controlling your every ringgit? Sounds like the existence of the living dead.

But once you’ve paid your dues – you’ll feel just as relieved as the head of the Army when Aragorn said his oath was finally fulfilled.

As anyone keen on investments will tell you; the biggest returns require the biggest risk. In the first Hobbit installment, the Unexpected Journey, Bilbo Baggins was offered 1/14 share of the treasure in the Lonely Mountain and considering how much gold and jewels were in that mountain; that’s not a pittance by any means. But of course, he needs to successfully battle a gigantic dragon (albeit not alone).

The Money Lesson: Just like Bilbo, if you can accept the risk of, in his case life and limb but in yours financial ruin, you could stand to gain enormous wealth. Of course, the stakes are high and you could end up in a less than pleasant state. Investments that are volatile and risky usually have the best yield. But not all hobbits are made for battle like Bilbo; just like not all investors are made able to stomach huge investment risk. 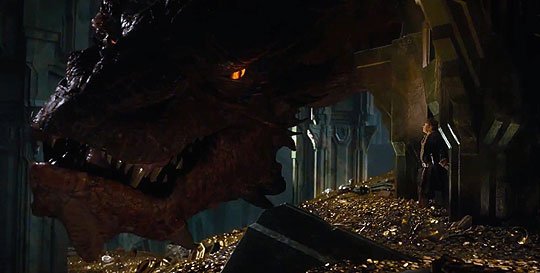 In the second Hobbit movie, the Desolation of Smaug, the dwarves use their coins to pay Bard the Bowman to help them to safety.

This emergency stash of money/gold was enough to secure their safe passage and highlights the importance of saving for a rainy day. They were locked out of their home and income producing gold mine by a fire-breathing dragon and yet were still able to scrounge up enough amongst themselves to pay Bard what he asked. If that isn’t a good emergency stash built on resourcefulness – I am not sure what is. It made the difference between dying on that side of the water and getting to Laketown safely.

The Money Lesson: Having an emergency fund is a non-negotiable and will help you many times out of sticky situation. Even when times seem difficult; saving a little will go a long way when you really need it. Your place of work may be overtaken by a fire-breathing dragon (your boss) but if the dwarves could still save a couple of coins perhaps you could too?

At the very end of the Hobbit: the Battle of the Five Armies, Bilbo comes home to find the hobbits of the Shire auctioning off his property. It was an almost free-for-all and people we’re scrambling for whatever they could get their hands on. Whilst it was possibly the ‘law’ of the Shire to deal with the property of a deceased hobbit; the possibility of your relatives having to scramble and fight off creditors and other stakeholders for your property if you pass away without a will, is very real.

The Money Lesson: Making a will is important to prevent the hassle of dependents having to fight over your estate. Add in the complication of banks and creditors and you have a surefire recipe for estate distribution disaster. Making a will doesn’t have to be complicated and although it isn’t you who will be inconvenienced in the end – you surely don’t want your hard-earned wealth going to the wrong people!

The last and most permeating lessons we found in the entire 6 part epic saga of our time; is that greed and allowing material possessions to enslave you is a major no-no.

You can’t watch either of these trilogies without seeing this giant message/lesson blared everywhere; at almost every point of each movie. Whether it’s Thorin Oakenshield’s madness over the Arkenstone and his gold or Gollum’s obsession with the ring. Neither obsession did either of them good and for Gollum; he followed the madness to the brink and into the fires of Mordor.

As Thorin Oakenshield finally said before he died: *”If more of us valued food and cheer and song above hoarded gold, it would be a merrier world. But, sad or merry, I must leave it now. Farewell.”*

The Money Lesson: The obsession with materialism can often cause problems in other areas of life especially when we spend inordinate amounts of money on collecting items for a hobby or in the pursuit of rare and expensive items overtakes everything else that should be important. It’s awesome to have passions and hobbies but it’s only when it consumes us that it becomes a problem.

We may not be literally plunged into a pit of fire or be hunted by a gold-greedy dragon; but we hear credit collection agencies can be pretty ruthless. 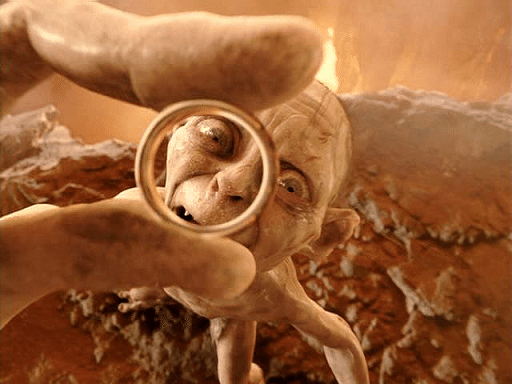 Whilst it may seem like nothing but good entertainment for a particularly boring weekend; the two Trilogies of LOTR and the Hobbit are a chock-ful of interesting life parallels; morals and lessons to take away. After all, art very often imitates life – or was it the other way around?