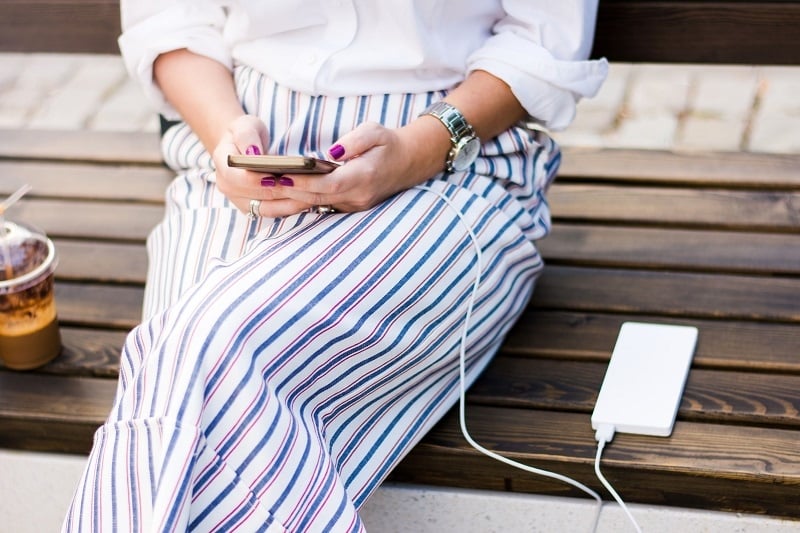 With millions of Malaysians owning smartphones, a power bank has now become a necessity rather than just an accessory. But just like the smartphones they help charge, not all power banks are created equal. It is important to know this, because one should not just buy the cheapest power bank they can find and use it.

It is actually dangerous to use cheap power banks. Most of the time, inside these products are cheap, low-efficiency batteries to store charge. More importantly, they also do not have security features that help prevent overheating or worse, spontaneous combustion (i.e. explode).

Power banks are especially useful when you’re travelling or when you’re using your mobile devices for extended periods of time – festive periods included! So if you’re contemplating to invest in a good, reliable power bank this Chinese New Year (or in general!), these are the main things to consider before buying a power bank. 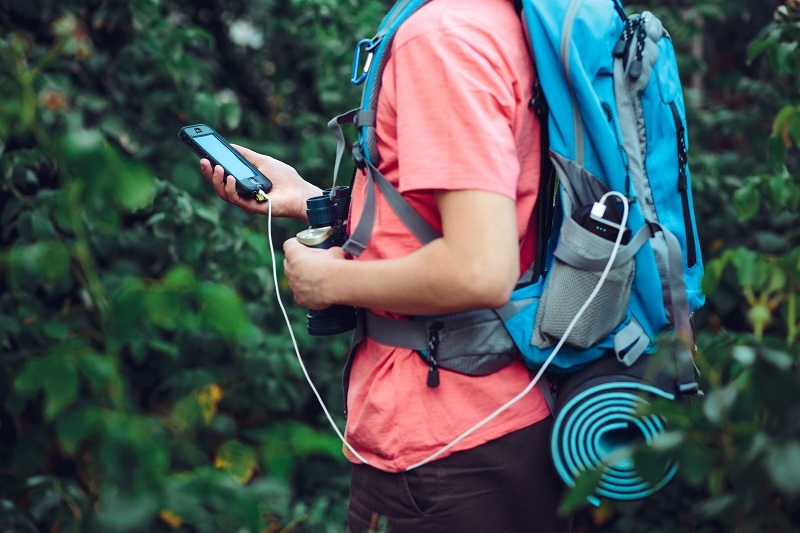 First and foremost, you need to consider what do you need the power bank for. Power banks vary in size and capacity, with the heavier ones being able to carry higher capacities.

Most people would want a mid-sized power bank for “general use” that is large enough to charge your devices a few times, but not too bulky for everyday carry. On the other hand, there are those who want one that’s small enough to fit their handbags while still carrying enough juice to not leave you stranded with a dead smartphone. And then there are others who want a “travel-ready” one with huge capacities and multiple charging ports.

The amount of stored charge in a power bank is stated in milliamp hours (mAh), which is the same measurement as those stated in your smartphone or tablet box. Common power bank capacities are 5,000mAh, 10,000mAh, and 20,000mAh. To make it easier to understand, most power bank companies translate this as “how many times you can charge your smartphone/tablet with a full-capacity power bank”. This is easy enough to find out for yourself, as it is just a multiple of the battery capacity of a smartphone or tablet. 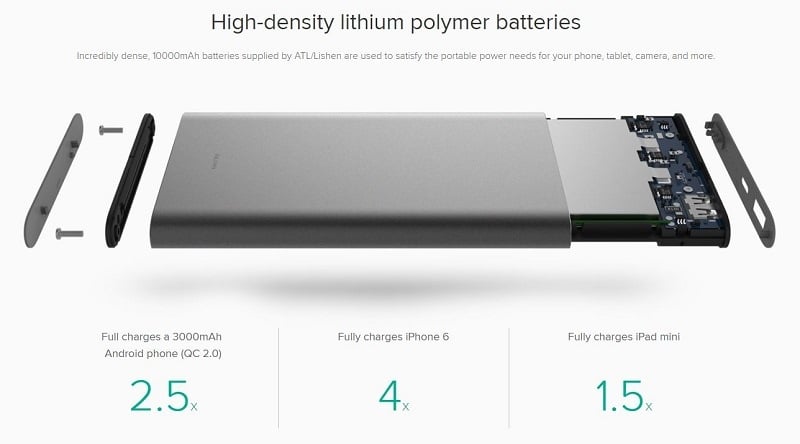 For example, a Samsung Galaxy Note 9 has a 4,000mAh battery, which means a 10,000mAh power bank can charge the phone from 0-100% 2.5 times. Of course, this is in theory – most people would be using their phones while charging them anyway, so this measurement won’t actually be accurate – rather, it is just a contextual estimate for consumers.

A 10,000mAh power bank is usually the most popular choice, as it usually has a good balance between capacity and bulk. That said, a 5,000mAh power bank slips into a handbag without a fuss – with barely a difference in weight. 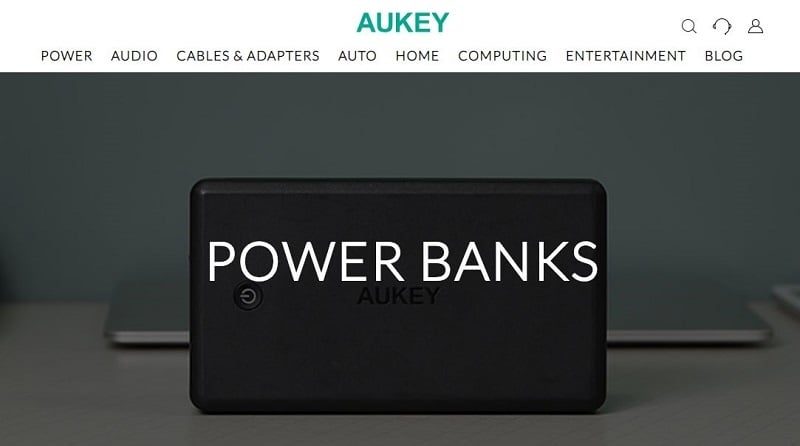 Aukey sells as many as 36 different power banks on its website. (Image: Aukey)

In the case of power banks, the company making them has a huge impact on how good the power bank is. And, companies who specialise in making power banks usually sell them at lower prices (thanks to economies of scale) than similar ones from smartphone companies – meaning you get quality products at a good price. Similarly, it is not a good idea to get cheap power banks that aren’t made by a reputable brand. There are a few reasons behind this, but the main one of course is your safety.

Reputable power bank companies ensure that their products meet stringent quality control requirements. For example, battery cells are sourced from companies such as LG and Samsung, who are leading battery-makers with proven track records. On top of that, each power bank would have some form of circuit chip protection that protects both power bank and the device being charged in the event of a short circuit, overcurrent, overheating, and more. 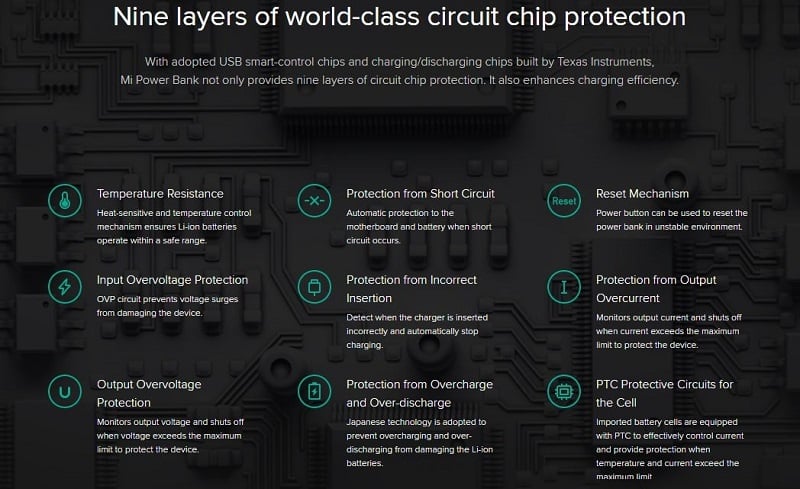 With these measures in place, good power banks not only charge and discharge more efficiently, they also last longer – and have a significantly lower risk of complications compared to cheap, unbranded, and yes, imitation power banks. Do keep a look out for those! Fake Pineng and Xiaomi power banks are very common – be sure to verify their authenticity before buying.

A company lives and dies by the products it makes, so you can be sure that a good power bank brand ensures reliability and long life. There are many good power bank makers out there, including Xiaomi, Pineng, Anker, Aukey, Tronsmart, as well as brands like Asus and Huawei who make their own affordable and good power banks.

This factor is usually overlooked in favour of size and capacity, but in reality, this is just as important a factor when considering a power bank. Having a fast charging power bank makes a huge difference in the overall experience in using one.

To explain this, we first need to discuss the “output” of a power bank – that is, the rate of which a power bank charges a device. Old power banks discharge slowly, at a rate of 5V/1A and up to 5V/2.1A – fully charging a modern smartphone with this output speed can take several hours. But thanks to companies like Qualcomm which pioneered the Quick Charge technology, power bank outputs are now dramatically faster: many fast-charging power banks can charge a phone from 0-50% in just 30mins!

It is very easy to identify if a power bank has fast charging support. At the power bank’s specifications (you can find this printed at the packaging and even on the power bank itself), look for multiple outputs: 5V/1A, 5V/2.1A, 5.1V/2.4A, 9V/2A, or more. Some modern power banks even support fast charge for input and output, which is a fantastic feature to have as it will minimise the time it takes to charge your power bank.

Finally, if you use a smartphone that has a USB Type C port, you should consider investing in a power bank that supports USB Power Delivery (USB PD), a new standard for devices fitted with a USB Type C port. It works similarly to Quick Charge technology by optimising the current to the maximum supported value of the device being charged, resulting in dramatically faster charging rates. Thanks to the higher power output, USB PD is the underlying technology that allows modern laptops to be charged via USB Type C.

However, USB Power Delivery is a relatively new technology (especially for power banks), and so USB PD power banks are more expensive than normal fast charging power banks. But given that these support charging for laptops and even the Nintendo Switch console, it might be worth the investment. 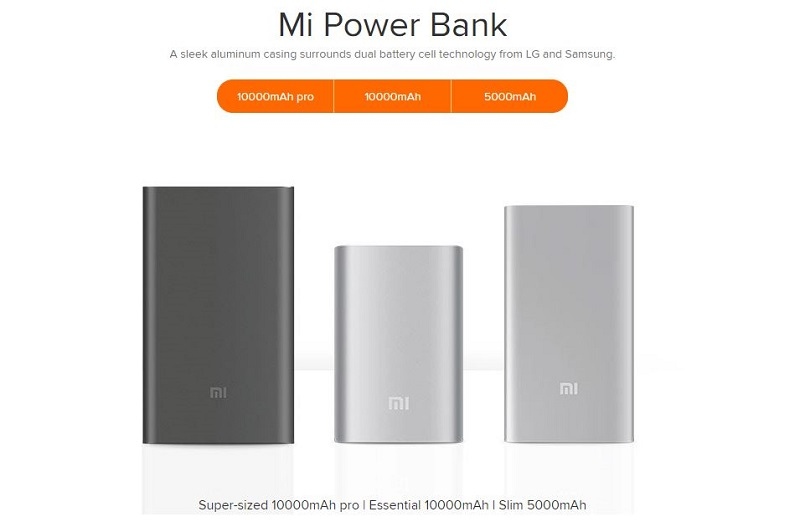 All earlier points would likely come down to this: budget. How much are you willing to pay for a power bank? Or perhaps, how much should you pay?

Generally, the prices of power banks scale up based on the capacity you are buying. Therefore, a 5,000mAh power bank would be the most affordable compared to a similar-specced 10,000mAh or 20,000mAh unit. Add fast-charge or USB Power Delivery support and the price will go higher.

As with all items you plan to use regularly (and in this scenario, in case of emergencies), you should invest in the best one you can get. But of course, the best doesn’t necessarily mean the most expensive.

For 5,000mAh power banks, you should be able to find good ones for very affordable prices of around RM30. Larger 10,000mAh ones have a huge price range, since they’re the most popular and prices will vary by brand. A basic 10000mAh unit can go as low as RM40, though we’d recommend to go with fast charging units which start around RM50 onwards. Finally, good quality 20,000mAh power banks with multiple output ports would start at around RM75.

Prices will vary and increase with added features like USB Type C power banks, fast in/out charging, and USB Power Delivery support, so don’t be surprised to see power banks that go all the way past the RM300 mark! 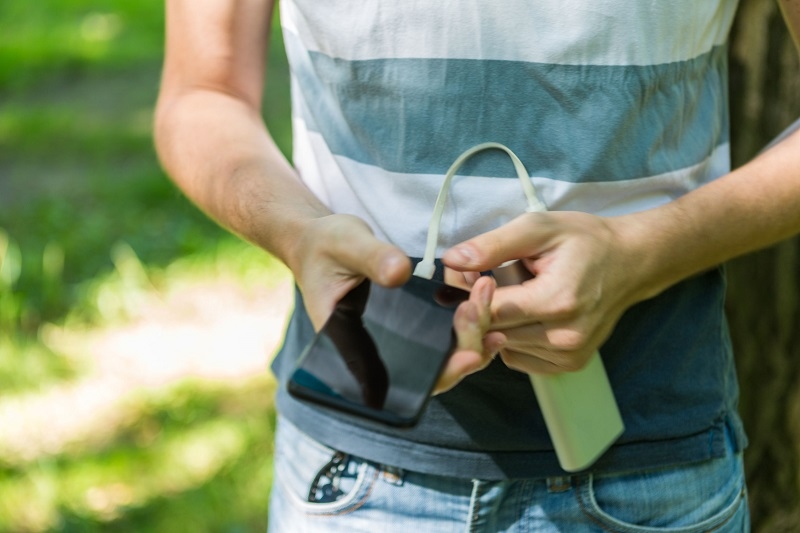 With hundreds of power banks sold in the market, which exactly should you buy? We’ve narrowed down some choices based on the types of power banks you need in different use cases. 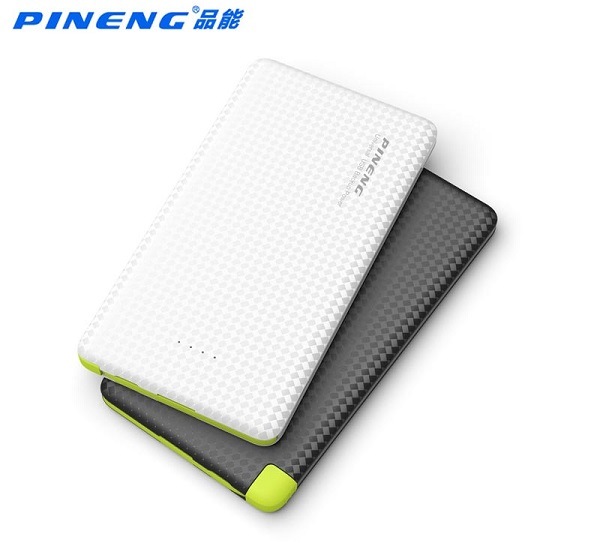 Pineng PN-952 5000mAh power bank. At just RM27.40, this tiny power bank is priced even more competitively than Xiaomi’s own 5000mAh power bank, making it a very popular choice. The Pineng PN-952 is just 9mm thin and weighs 118g, so it’s virtually unnoticeable in your handbag. Its output of 2.1A is decent, making this a useful item for emergencies.

Best power bank for universal use: 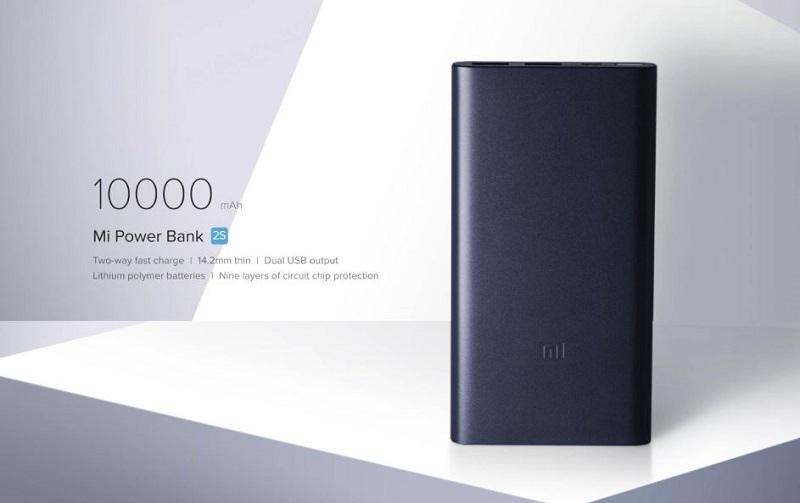 Xiaomi Mi Power Bank 2S 10000mAh. Xiaomi has a wide range of 10000mAh power banks, but this is our pick as the best of the lot. Two-way fast charge, dual USB output ports, and Xiaomi’s nine-layer circuit protection for just RM65 means this power bank has the best bang for the buck.

Alternatively, you can also try out the Aukey PB-XN10 10000mAh power bank. It packs a USB Type-C port that can be used to charge the power bank or charge a second device (allowing you to simultaneously charge two devices). In emergencies, you can even use a Type C to Type C cable and (very slowly) charge a dying laptop. Its proprietary AiPower technology works by automatically determining the safest maximum recharge rate, so you spend less time charging your device. At RM79, it’s a little pricier, but may be more versatile. 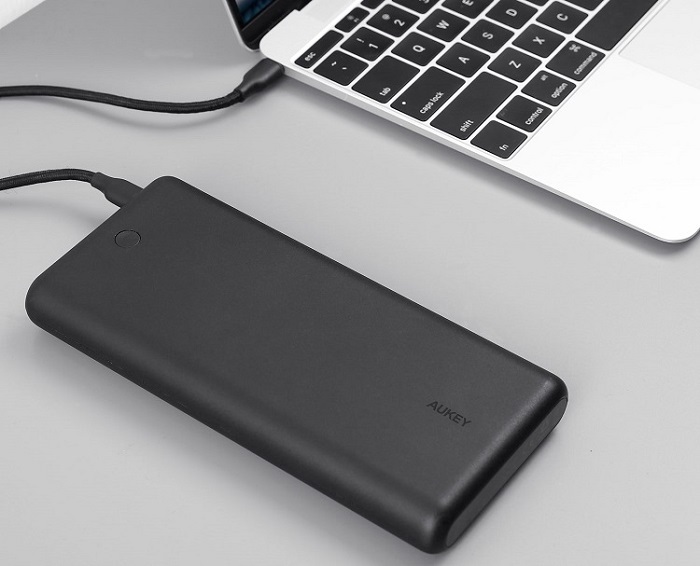 For just RM168, this is quite a steal, considering one of our favourite travel power bank, the Aukey PB-XD26 26800mAh retails at RM329. The Aukey has a larger capacity (the maximum that you can carry onboard flights), higher overall output across the ports, two-way 45W Power Delivery on the USB Type C port, but one less USB port than Xiaomi’s offering. 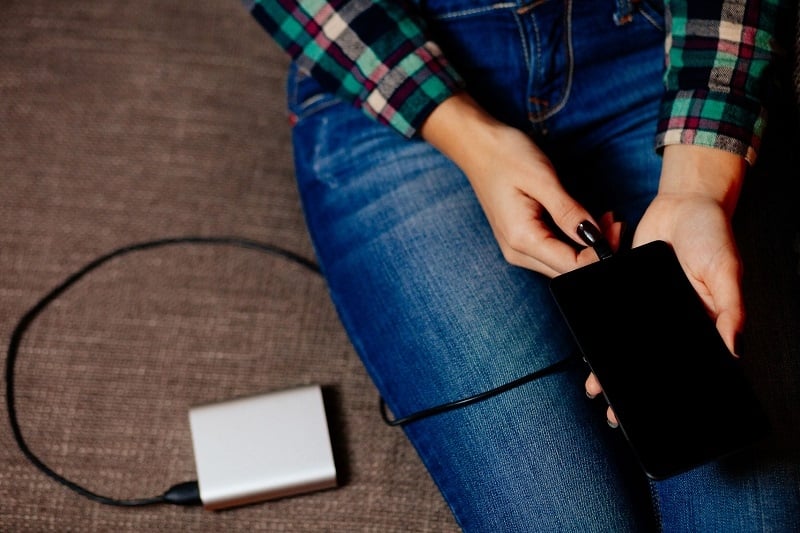 As we mentioned earlier, power banks are now more a necessity than an accessory. Choosing the right power bank for your needs is important, and hopefully this power bank buying guide helps you the next time you’re in the hunt for a solid and reliable power bank.

Thank you so much Yau Pang for the effort to contribute this informative and useful buying guide.
Wish I had read this earlier.
Purchased one fake Pineng PN999 20,000mAh below Rm30. This damn thing didn’t perform as expected.
I have rejected within one week and gotten my refund.
Right now am testing another one also below Rm30, definitely fake again. It’s charging but rather slow.
Anyway lesson learnt.
Thank you once again, keep up the good work!!