Samsung has fast-tracked the launch of its new Galaxy S series of smartphones with the new Galaxy S21, Galaxy S21+, and Galaxy S21 Ultra. On top of that, the South Korean giants has also announced two new accessories: the Galaxy Buds Pro and the Galaxy SmartTag, an interesting new product.

There’s a lot to cover with the three devices, so let’s jump straight to the main highlights. The S21 series feature a familiar design that’s enhanced by the new “Countour Cut” camera housing, which seamlessly blends into the phone’s metal frame. This housing is also made from metal, which means it’s more durable than the older generation’s glass housing. Depending on the colourway, you could even get colour-contrast variants which looks neat.

The S21 series will also be the first from Samsung to omit the inclusion of a charger and earphones in the box. Taking a leaf out of Apple, the environmental considerations meant the only standard accessory to come in the box is a USB Type-C cable. It’s highly likely more brands will follow suit.

Now, on to the nitty gritty of the devices. 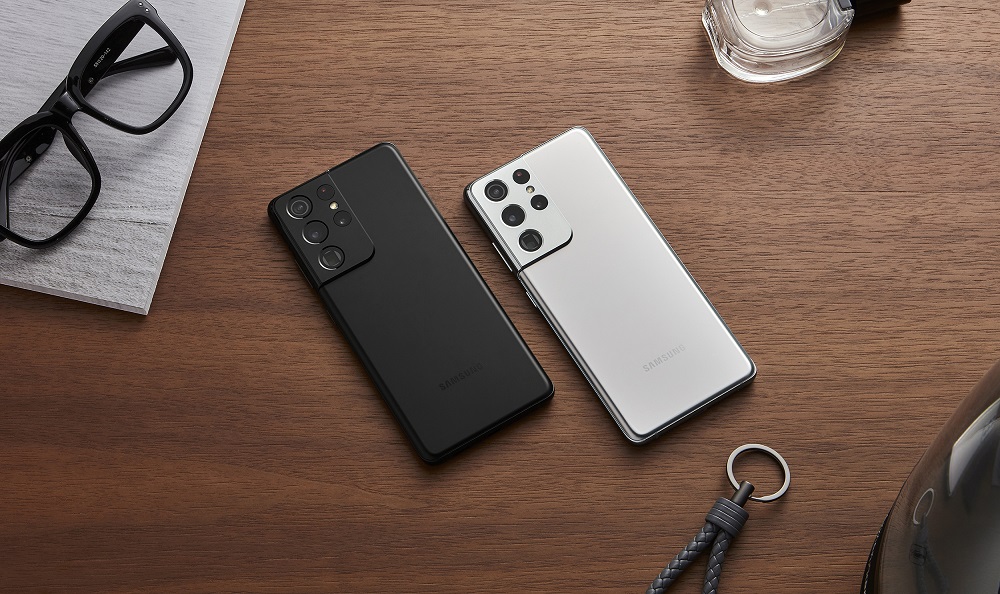 The biggest and baddest of the lot, the Galaxy S21 Ultra picks up where the Galaxy S20 Ultra left off, with next-level specs lives up to the “Ultra” moniker. Powered by the brand new Exynos 2100 processor that appears to bridge the gap with the Qualcomm Snapdragon chipsets, it’s also the first flagship Samsung smartphone to feature two zoom lenses: one set at 3x, and the other at 10x. Combined with the massive 108MP main sensor (now in its second-generation) and a 12MP ultra-wide sensor, it looks like the S21 Ultra may have of the most flexible and adaptive rear camera setups in the market.

Just like the S20 Ultra, the S21 Ultra packs plenty under the hood. Accompanying the Exynos 2100 chipset is either 12GB of RAM with 256GB of storage, or a massive 16GB of RAM with 512GB of storage. There’s no expandable storage this time around, however (though one could argue the need for one given the laptop-level storage). There’s a 5,000mAh battery for all-day battery life and more, and ultra-fast charging for both wired and wireless when you need it.

The S21 Ultra’s 6.8-inch display has also been given a much-requested upgrade to offer both WQHD resolution at super-smooth 120Hz, which wasn’t possible in the S20 series. Like the futuristic Galaxy Z Fold 2, the adaptive smoothness goes from 10Hz up to 120Hz, which promises better battery life. On top of the class leading display technology, Samsung is also introducing Eye Comfort Shield, an AI-powered feature that intelligently tweaks the blue light filter to reduce eye fatigue. 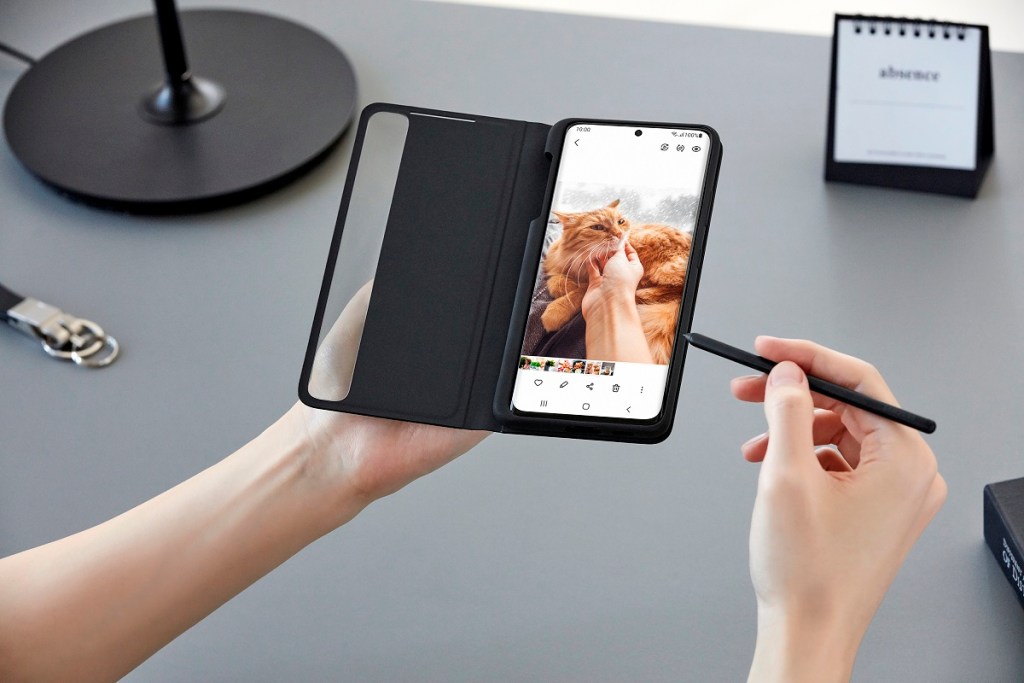 Interestingly, the S21 Ultra will also include support for an S Pen. A Galaxy Note staple, the S Pen here is an optional accessory, but will offer some of the most popular feature you’d normally find on the Galaxy Note, including Air Command. There will be two variants, a standard model and an S Pen Pro, and will be sold separately. 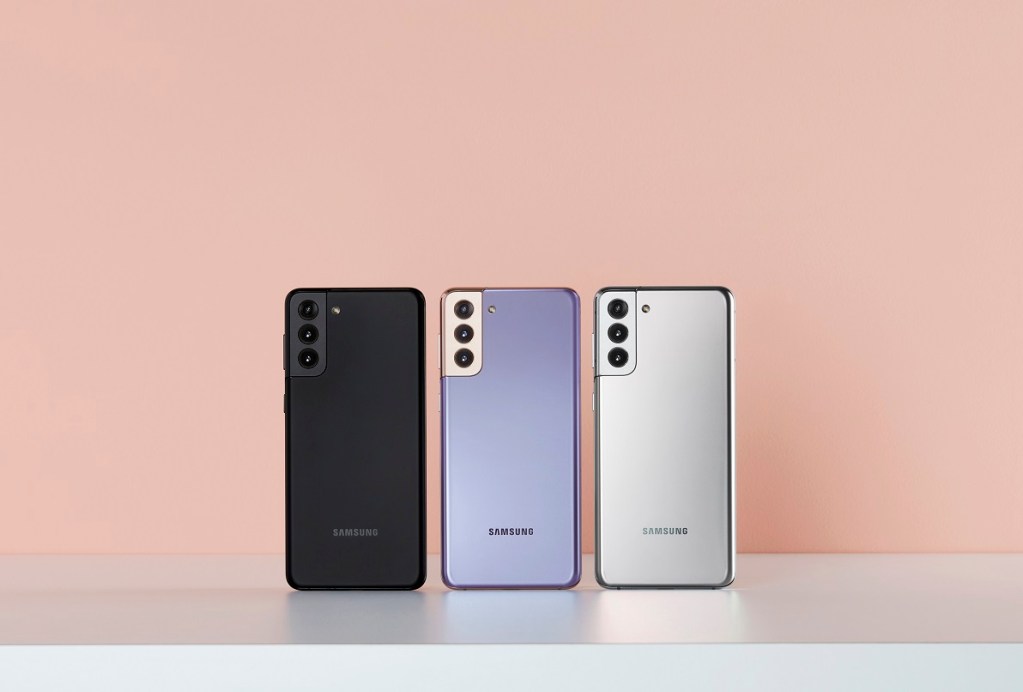 The middle child of the series, the S21+ aims to offer premium flagship experience without breaking the bank. It’s powered by the same Exynos 2100 processor, but packs 8GB of RAM and a generous 256GB of storage. The battery capacity is almost as large as the S21 Ultra at 4,800mAh, and has the same ultra-fast wired and wireless charging capabilities.

As for the display, the 6.7-inch panel has some good and bad news. The good news is that it has a new adaptive refresh rate that dynamically switches between 48-120Hz depending on what is on the screen. It’s also got the new Eye Comfort Shield, but… the display resolution has been reduced from WQHD+ on the S20+ to FHD+ (2400 x 1080). Of course, the S20+ has a WQHD+ resolution, but didn’t support 120Hz at that resolution.

Finally, the S21+’s camera setup looks to be unchanged from the S20+. The front camera is a single 10MP dual-pixel sensor, while the back is a triple-sensor setup comprising a 12MP main sensor, a 12MP ultra-wide sensor, and a 64MP telephoto sensor. 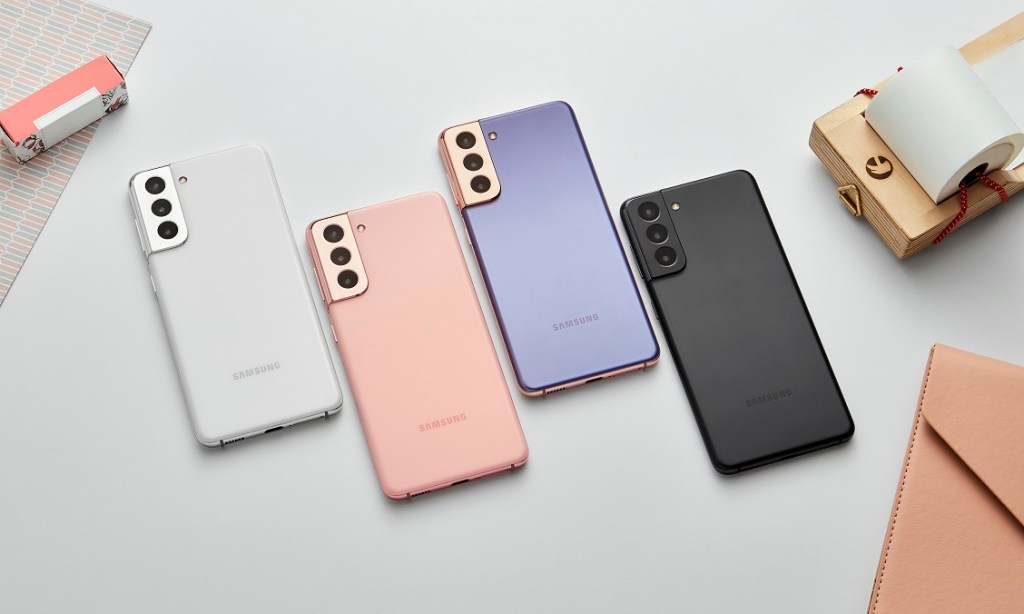 Where the S20 variant from last year had noticeably specs, Samsung has done well to create the S21 to be more competitive, with hardware that is essentially similar to the S21+.

Most of the internals are similar between the S21 and S21+, including the processor, RAM and storage, as well as front and rear cameras. The only differences are of course the display, at a smaller 6.2-inch size but with the same FHD+ resolution, 120Hz refresh rates, and Eye Comfort Shield, as well as a smaller battery at 4,000mAh.

One big change, though, is on the outside: the S21’s back is made from polycarbonate, while the S21+ and S21 Ultra both have Corning’s new Gorilla Glass Victus. It’ll feel less premium, but the upside is less worry about your glass back catching scratches or cracks. 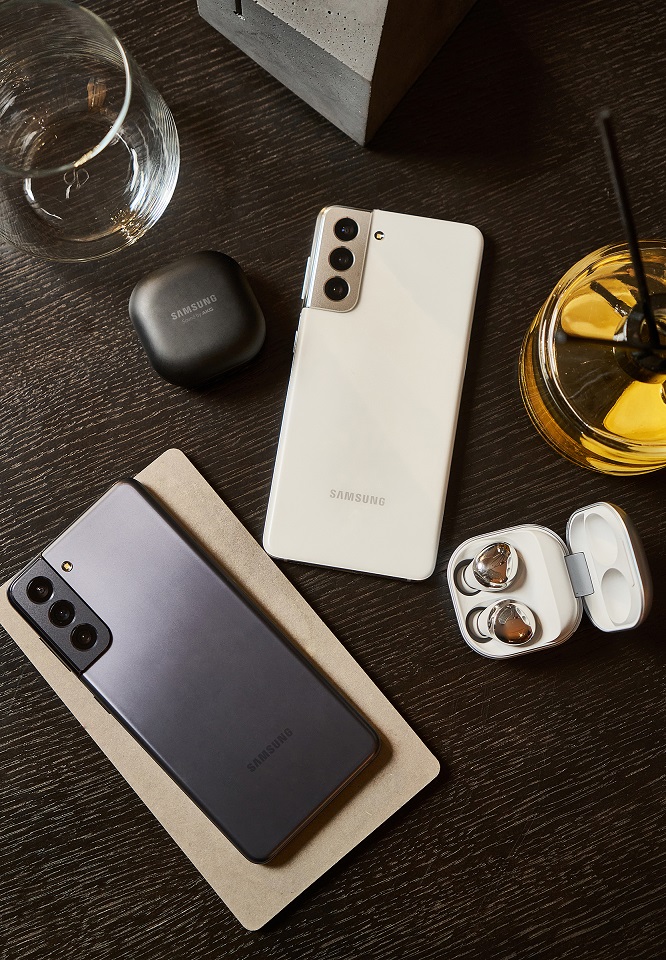 Besides the hardware, Samsung’s placed a heavy emphasis on AI to assist with its unique Intelligent Active Noise Control that can block up to 99% of ambient noises, but disables it when it recognises you are having a conversation – before enabling ANC again when the conversation ends. AI is also heavily used to identify and isolate wind noises, intelligently countering wind noise frequencies to ensure voice clarify.

A new Internet of Things (IoT) product, the Galaxy SmartTag (not to be confused with the Touch ‘n Go SmartTag we grew up with) is a nifty keychain of sorts that you can attach to your valuables. Its battery lasts for months, and the Bluetooth Low Energy and new Ultra Wide Band (UWB) technologies fitted within lets you track the Smarttag wherever it may be should it go missing, using the Samsung SmartThings Find app.

As before, Samsung has wasted no time in opening the pre-orders for the Galaxy S21 family. Pre-orders have begun today at 1am and will go on until 28 January. The Galaxy S21 series and Galaxy Buds Pro and Galaxy SmartTag will all go on sale staring 29 January.

The retail prices of the products are listed below:

As usual, pre-orders will come with a set of freebies based on what you’re purchasing. Here’s the breakdown:

Interestingly, you could even get a free gift for pre-ordering the Galaxy Buds Pro: you get a choice of a Samsung Wireless Charger Pad worth RM239, or a Galaxy Buds Pro Strap Cover worth RM99.

Pre-orders can be made across a variety of channels, from Samsung’s official website, popular retailers such as Senheng, Harvey Norman, Best Denki, Courts, and Urban Republic, and all four major telcos (Celcom, Digi, Maxis, U Mobile).

You can also pre-order at the official Samsung stores in Shopee and Lazada. At the moment, the official pre-orders on Lazada and Shopee adds a third free gift: a cool Samsung Wireless Charger Trio that can charge 3 devices simultaneously – this is worth RM399. Nevertheless, we expect more retailers to open their pre-orders in the coming days (possibly with more freebies!), so we’ll keep a look out for that and share the best ones with you.