Samsung has announced the arrival of its first triple camera smartphone: The Samsung Galaxy A7 in the Malaysian market. 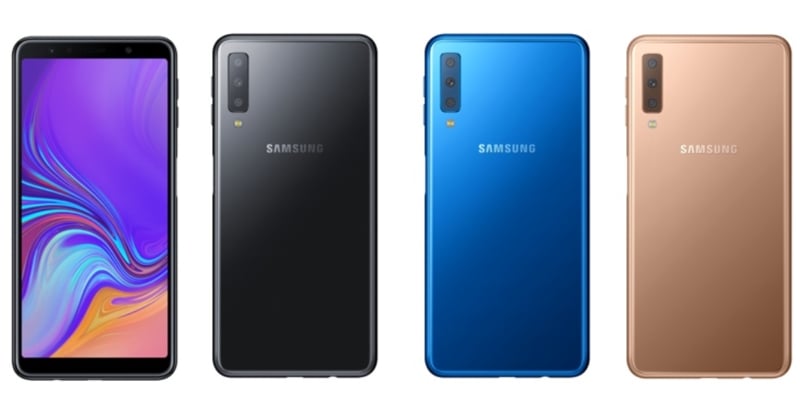 Samsung’s first triple rear camera smartphone, the Samsung Galaxy A7 (2018), is now available for pre-order in Malaysia. Aimed at the younger generation, the mid-range device is priced at RM1,299.

The standout feature of the Samsung Galaxy A7 (2018) is its triple rear camera. Lining up vertically at the top left corner, the three camera sensors are optimised for specific scenarios: a 24MP primary sensor, an 8MP ultra-wide sensor to capture 120-degree ultra wide-angle photos, and a 5MP depth sensor for portrait shots. Interestingly, the camera also features the Scene Optimiser feature from the Galaxy Note 9 which automatically optimises image quality using artificial intelligence (AI) algorithms.

Besides the triple camera setup, the Samsung Galaxy A7 runs on an Exynos 7885 octa-core 2.2GHz processor with 4GB of RAM. Samsung’s triple camera phone features a 6 inch Super AMOLED Full HD+ (2220×1080) display, a 3,300 mAh battery, a 20MP front camera, and a side mounted fingerprint sensor. The Samsung Galaxy A7 also comes with a triple SIM tray which supports two Nano SIM cards and a Micro SD to complement the phone’s 128GB of memory up to 512GB.

The Samsung Galaxy A7 is now available for pre-order via Samsung’s website and its authorised dealer. Customers who pre-order the phone from 15 Oct to 21 Oct will be given a set of freebies worth RM302, which comprised a mini tripod stand, a thermos unique mug, and a Samsung screen protection.

Some Malaysian Families Only Have RM76 Disposable Income Every Month

Unique Funeral Traditions Around The World

Read More
There are plenty of benefits to sticking with one bank for your many financial needs. Some of which you might not even be aware of!
BBudget 2021

Read More
Avoid a pricey surprise on your phone bill by saving money on expensive data charges with these handy tips and tricks!
OOnline Shopping

Read More
The Ministry of Entrepreneur Development and Cooperatives (MEDAC) revealed that as many as 140,883 small and medium enterprises…
AApps