Imagine this: you scramble groggily out of bed and drag yourself to the bathroom. Opening the medicine cabinet, you reach for your toothbrush and toothpaste only to find the toothpaste tube curled in a sad little twisty shape after being twisted again and again to get every last bit of paste out. there isn’t a drop left and you certainly can’t go to work with breath that reeks of stale yeast.

Luckily, there’s a mart just 2 minutes from your home. A mad dash in your pyjamas may get you a few askance glances but it’s better than a day avoiding anyone with any semblance of a sense of smell. The point is your nearby mart saved you today and probably did on many other occasions before.

When you needed a Panadol for a pounding headache; some refreshment for a sudden surge or house guests or even a pack of condoms for those nights when your wife’s headaches are finally gone.

Convenience stores are here to the rescue. Like a big supermarket, rest assured that you’ll get yourself covered ranging from food items to toiletries. But unlike the big supermarkets; marts have to charge a wee bit more in order to stay afloat because they don’t sell in vast quantities.

We all know it can be just a wee bit more expensive to get our stuff from the marts but we bite the bullet because of the convenience factor.

Even so marts are not all made the same. Some charge more, some less so we sought to find out just how much you’ll be forking out for some essentials depending on which mart you have closest to home! 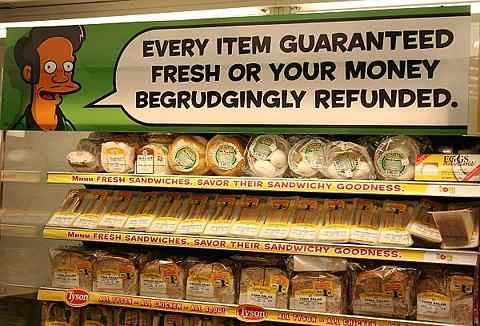 We conducted a little survey. Every stores carries different brands and weights, we narrowed down our selections and picked out 11 essential items and compared prices across 4 convenience stores.

*Prices correct at time of research. Discrepancies may arise due to changing promotions.

Which is the cheapest mart?

It was a close battle between KR1M and 99 Speed Mart for the cheapest prices but of course the government initiative sundry mart won: even if it is by a hairline 44 sen.

7 Eleven came out as the most expensive but it is unlikely to be a shocking discovery for many who frequent the 24 hour convenience store. But those of you who have no other mart to turn to but a 7- Eleven, don’t sweat it!

Before rushing off to a cheaper mart further away from home, remember the golden rules to mart shopping.

Neighbourhood marts are super convenient and a life-saver during out-of-a-household-item emergency but if you’re not careful – you could be spending a lot more than you needed to!