RM2,500 Fresh Grad Salary: Why it’s Not a Question of Enough

Much has been said about the fresh graduate salary of RM2,500 but should it be a question of something as subjective and open to opinion as ‘enough’? Is RM2,500 really enough to live on?

The government announced Budget 2015 on Friday and the press carefully dissected it over the weekend. But what stood out for this writer (and evidently some consumer groups too) was the abject failure to substantially deal with the problem of cost of living. Like you can’t have a horse without a carriage; one can’t speak of cost of living without also talking about stagnating salaries (be it in private or public service) and minimum wage levels (which are not possible to survive on, by the way).

The continuous rise of inflation which will skyrocket the moment GST comes into effect and the effects will be even more devastating if nothing is done about the general wage levels. For many middle class folk (households earning between RM4,000 – RM10,000 and singles earning above RM2,000); the budget really offered them nothing much to ease the pain of petrol price hikes and soon to be implemented GST cause-and-effect inflation. Whilst middle class households are outside the purview of this article; let’s talk a little bit about fresh graduates earning RM2,500. 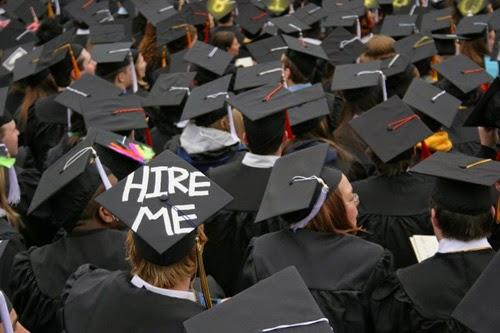 A few days before the budget; the internet combusted with discussions on the RM2,500 starting salary for fresh grads (at which rate, you don’t qualify for BR1M handouts already as the RM350 allocation for single people above 21 years is for those earning RM2,000 and below). Whilst AKPK official, Mohd Adnan Anan Abdullah unwittingly started the debate by saying the amount was ‘enough’ for fresh graduates if they managed their money well. Netizens appeared unconvinced as they responded with reasons why it may not be enough.

Now the question of ‘enough’ is highly subjective and is more a question of individual situation than one of industry pay scales. But since the question is on everyone’s mind – we decided to weigh in too.

As stated earlier, being all-encompassing and saying with absolute surety that RM2,500 is enough for fresh graduates is pretty much impossible. But we’re going to try to cover as varied scenarios as we can. We asked around and found 3 fresh graduates earning the same salary but with vastly different spending stories. Take a look at how they manage monthly.

“I earn about RM2,500 and I just graduated a few months back. It’s not the greatest pay but I am not complaining just yet. If I was earning this in 2 years then I definitely will be! For now I still live with my folks – no rent and free dinners. I help out by giving my little sister pocket money but otherwise my salary is mine to spend.”

“Can I survive on my salary? Sure. RM2,500 is not really that low but it isn’t high either. I have to pay rent as I am originally from Pahang and I send my parents just a small amount of money as a token so that is the extra I have to fork out monthly over my friends who still live with their parents. I can’t afford major shopping trips but I wouldn’t say I am in a bad situation.”

“At the moment, my salary is a little low considering the number of people who depend on me but I am hoping this won’t be the case for too long. I am the eldest in a family of four siblings with my brothers and sisters still studying. My father passed away early on and my mother is not well enough to work.

My salary pays the rent for our apartment, my mother’s medication and hospital visits and other utilities whilst my 17 year old sister’s part time job in retail helps with the groceries and for her own pocket money so she takes care of herself. We’ve got an old Proton Saga which belonged to my father so that helps us get about. I can’t afford bus fares so I send my siblings to school. We’re not comfortable and I have zero savings every month but at least we have a roof over our heads.” 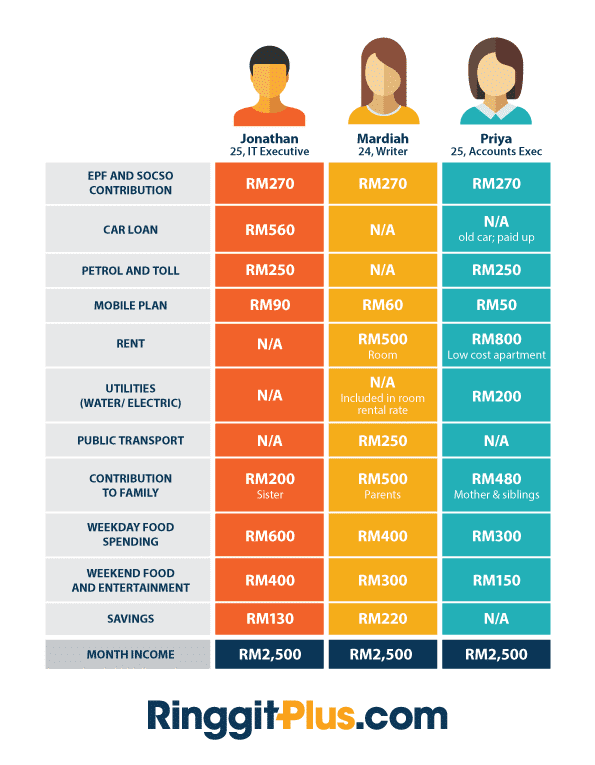 Looking at the situation, it would be possible for anyone to say that no matter how tough your situation; the amount is enough. But is it really? Only Jonathan’s situation appeared comfortable but that is because he has the backing of his parents’ home.

For Priya, the amount is stretched to almost breaking point. Should any emergency come up the family would be in dire straits. It’s not enough!

Not a question of ‘enough’

No doubt, AKPK sees a lot of financial mismanagement in their line of work. It is definitely from the noblest of intentions that Mohd Adnan pointed out best practices for financial management and highlighted ways to cut back, but the suggestions seemed to tar all fresh graduates with the same situational brush. As is clearly depicted above, situations can vary so much and even more than can be holistically provided for in one article.

One can only guess that the AKPK official is more used to seeing financial mismanagement in his line of work that it resulted in his statement. AKPK is after all a debt management body that helps Malaysians restructure their loans once they’ve been stretched too thin. AKPK’s clientele consists of people who in the first place qualified (with sufficient salaries) for so many loans or credit cards to get into trouble for it. Very rarely do fresh graduates with RM2,500 salaries qualify for so many legitimate bank loans in the first place.

For the people who bought one too many handbags or cars; the advice of AKPK may prove useful (“Saving is important, but calls for tough financial discipline and perseverance, and can be done through unit trusts or separate bank accounts.”); but for people like Priya; it’s missing the point altogether.

You see, for Malaysians, such advice no matter how kindly meant, ignores that reality that cost of living is increasing every day with inflation predicted to hit 4% next year while wages have remain stagnant.

In 2009, fresh graduate salaries were at RM2,000 – RM2,500 and they have remained the same to this day (although the percentage of grads earning the highest RM2,500 has increased across fields since then). Even if the AKPK’s calculations and research render RM2,500 ‘enough’ is that the amount they should be paid? In the wake of more subsidy cuts and looming GST – it appears almost comical to tell the rakyat that their own financial management was to blame.

A question of a fair wage

Perhaps fewer brickbats would have been received had officials (including Federation of Malaysian Employers executive director Shamsuddin Bardan who, in the same report asked graduates to not be picky or face unemployment) talked about how much was fair based on their deciding parameters.

For instance; a statement such as “RM2,500 is a fair starting wage for fresh graduates considering market forces and the training required for the graduate” would have elicited a different response because it is based on facts and figures not random opinion. I could very well come up with a statement myself: “Each car owner only needs to drive 15km per day. If you drive anymore, you’re not managing yourself better. Quit your job that’s 20km away from home and don’t ever go anywhere else. Ever.”

Sounds stupid doesn’t it? It does because it fails to account for the difference in situation for people with jobs further away from home; kids to send to school or errands to run. It fails to account for the variables of human existence assuming we all fall within the cookie cutter. We don’t. And neither do all the fresh graduates earning RM2,500 lead similar lives with the luxury of deciding whether to save; buy a car or put siblings through school.

Are you saying wages should be arbitrarily decided?

The above discussion would appear like we are recommending that wages be arbitrary but the truth is we cannot expect employers to take our personal situations into account when deciding what to pay us. Imagine if your boss decided to pay you less than your equal ranking colleague just because you didn’t have children and he did. You’d be upset and the move would be both discriminatory and unprofessional. That isn’t the solution.

A more plausible and definitely a long-called for action plan would be for policy makers to increase minimum wages and salary scales all around to generally reflect the amount that is fair considering the type of work; expertise and qualifications required; current economic conditions and the global marketplace. The exercise needs be thoroughly thought through and executed ensuring that private companies also comply. Increasing wage scales across the board will no doubt result in a knee-jerk reaction of higher prices but that is happening anyway without the cushion of a higher wage for the people.

Tying up the income debate

AKPK provides an invaluable service to the rakyat and it is no doubt that their advice comes from many years of working with financially strapped Malaysians. But simplifying the income debate to what is enough for frugal living doesn’t really help an already disgruntled people continuously hit by price hikes without pay hikes. It further fortifies the view that officials are out of touch with on-the-ground sentiment and experiences.

Instead of telling us what to do with our money or what should be enough or not enough, why not study and consider how much of a salary is fair considering the amount of inflation the country has seen; global wages for similar industries in developed countries (no sense aiming low instead of seeking to upgrade our situation); the possible variations in situations (within reason) of the people; available initiatives from the government (or the lack thereof) and the recommended standard of living we want to see our citizens experiencing?

The question of ‘enough’ is subjective and for the most part a matter of opinion. Perhaps it is more importantly a question of fairness. Graduates not only pay tens of thousands (to private institutions) to obtain a degree, they spend years in grueling study and training to be qualified in their chosen fields. Whilst they may not have experience they’re eager to work hard and bring with them technical knowledge that make them easier to train to those without. Considering the effort they put in and the current cost of living perhaps it’s high time a review of fresh graduate wages is necessary.

During the announcement of Budget 2015; Prime Minister Najib Razak said the following in justification of parliamentary salaries:

“Members of Parliament (MPs) play an increasingly important role, particularly in local communities from various aspects, including welfare, religion, social and education. In this regard, the services of MPs as people’s representatives or leaders in the respective parliamentary constituencies are needed at all hours. To reflect the responsibilities and the leadership, I propose that their allowances be raised…”

If a hike in parliamentarian wage can be justified as per above, why can’t we similarly pay salaried workers according to what is fair based on the effort and expertise they bring to the job? Graduates (fresh and seasoned) provide the backbone of expertise across industries for the country’s economy and overall development. Surely that is something worth investing in.

Home Without The Hardship

How Do Balance Transfer Credit Cards Work? Here Are The Best Deals.

Read More
Many know the devastating effects of cancer, but few talk about just how expensive cancer treatment costs can be.
TTravel

Read More
Malaysia Airlines (MAS) has announced that it will be extending the validity of Enrich Miles, Golden Lounge Access…
SSmartphones