Lifestyle
Personal Finance News
No more "Butts" - Stop smoking and Save up Instead!

Smokers, the time has come for you to stub out that cigarette once and for all. It is bad for your health, but we all know this. A picture, as they say, is worth a thousand words.

In case you’ve forgotten about the health implications (ignorance is bliss after all), we’ll show you again some of the anti-smoking images you’ll find on any packet of death sticks. 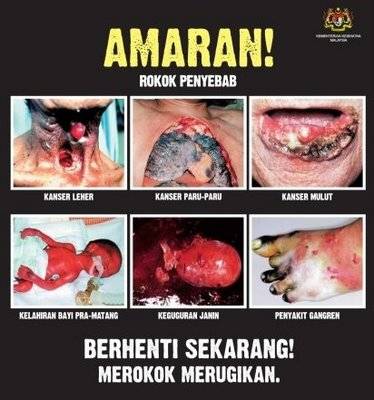 There is another reason why we suggest you stop smoking – this costly habit is burning a big fat hole in your pocket (and lungs!). As of this week, the majority of cigarette brands in Malaysia would have raised their prices to RM13.00 for a pack of 20’s; an increase of RM1 since October 2013. Not that expensive, you say? But do you know what else you could purchase with only RM13.00 in your pocket?

Instead, smokers are choosing 20 sticks of Dunhill over nasi lemak? We are appalled.

BAT, JTI, but not Philip Morris (yet)

Tobacco companies are not increasing their prices willy-nilly; they are forced to do so due to “cost pressure”. But not all companies will follow suit. So far, only two out of the three main tobacco companies in Malaysia have succumbed to the price hike – these two companies are British American Tobacco (BAT) and Japan Tobacco International (JTI). Together, they produce cigarette brands like Dunhill, Kent, Lucky Strike, Pall Mall, Winston, Mild Seven, Camel, Salem and Benson & Hedges.

But Hey-ho! Fans of Marlboro, Sampoerna, and L&M get to cough for another day since the tobacco company that these brands belong to, Philip Morris, will maintain the prices…For now.

The Cost of Smoking: How Much are You Burning?

Most smokers usually have this thought in mind: “I only need X packs per week, unlike that guy over there who smokes two packs per day. I’m saving tonnes of money compared to that guy!” Allow us to shatter that illusion because as long as you’re smoking, you will be burning a BIG hole in your wallet. Let us explain why (assuming that your preferred cigarette brand is Marlboro – RM12.00 per pack):

If you’re smoking ‘just’ one pack per week for the next 20 years (assuming cigarette prices move in line with inflation), your savings could be as much as RM12,000. The value is equivalent to a down payment for a car or a trip to Europe!

If you choose to deposit RM624 into a 12-month fixed deposit account instead of spending it on butts (cigarette, not Nicki Minaj’s), you could save even more money and earn up to 3.95% interest rate on your savings.

Other Costs To Consider

Oh yes, there’s more. So maybe you are in your 20′s now and don’t have to fret about the side effects of smoking. However, keep up your habit and in ten years’ time, you will be paying more than you bargained for. Some of these costs include:

Life Insurance Premiums – Smokers will be listed in the smoker risk category, which means a higher premium. This is because the mortality rate for smokers is much higher than it is for those who don’t smoke.

Medical Cost – Smoking obviously increases the risk of many types of long term chronic illnesses; which means that a good medical insurance is a must to cover any possible health implications. Or else, medical bills will undoubtedly cause a  huge strain in your financial budget.

So there you have it, folks: some solid reasons to put out the fire in your lungs and your wallet. We’re not trying to be preachy; but with that much nasi lemak to give up to fund the habit, we just had to say something.