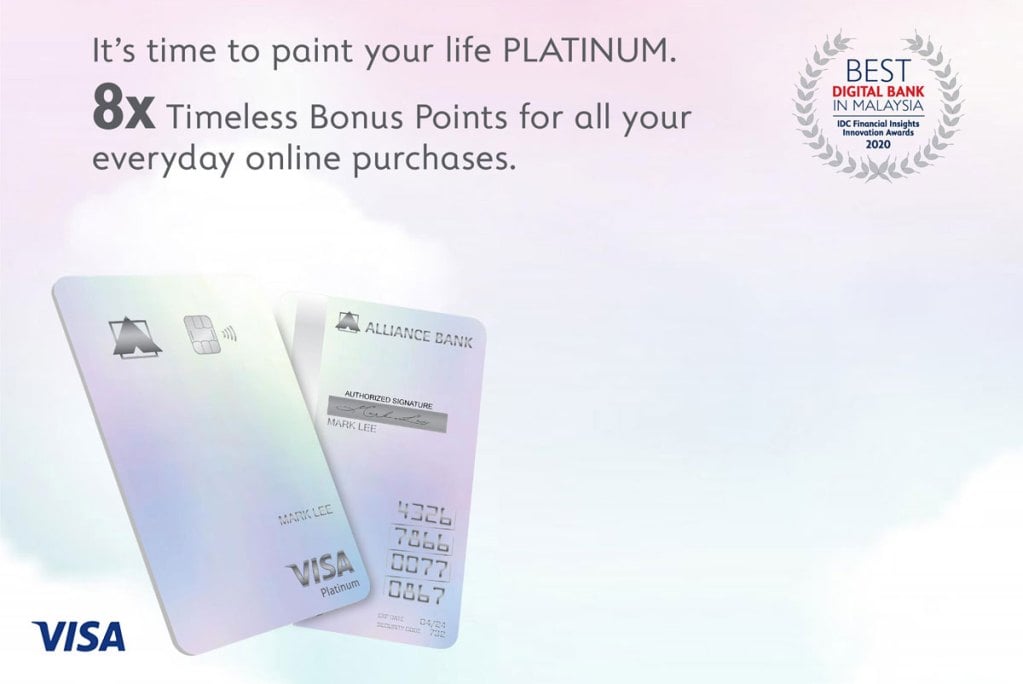 Previously, the Alliance Visa Platinum offered 3x TBP on overseas transactions and 1x TBP on local retail transactions. These benefits remain the same post-relaunch, with the new addition of the 8x TBP for online and e-wallet transactions – a useful benefit to have with less people travelling and more people spending online these days. Alliance Bank has also transformed the Visa Platinum’s card face from its previous grey-black colour to a more attractive, pearl-hued shade of white.

The other major difference to the card is that it is now accessible to a wider pool of applicants than before. Fresh graduates with a minimum income of RM24,000 annually or RM2,000 a month can apply, compared to the minimum income requirement of RM60,000 per year (RM5,000/month) previously. Meanwhile, the annual fee for the Alliance Visa Platinum has been lowered from RM438 to RM120. After the first-year waiver, you can continue to enjoy a waiver if you carry out a minimum of 12 swipes a year with no minimum spend. As for the Alliance Visa Infinite, cardholders now also enjoy 8x TBP on online shopping and e-wallet top-ups, 5x TBP on groceries and overseas transactions, and 1x TBP on local retail transactions. Previously, the card only offered 5x TBP on overseas spend and 1x on local retail transactions, so the categories for online transactions and groceries are new. The Alliance Visa Infinite also offers miscellaneous perks like a 3-month 0% flexi payment plan on flight tickets, hotel bookings, and overseas spend.

The annual income requirement for the Alliance Visa Infinite has been drastically reduced, from RM150,000 per year (RM12,500/month) to just RM60,000 per year (RM5,000/month) – making this probably the most easily attainable Visa Infinite card in the country. This does make the Alliance Visa Infinite slightly less exclusive in nature – which is slightly ironic when you consider that the card’s new, sleek black design looks a lot more high-end than the blue patterns of before. 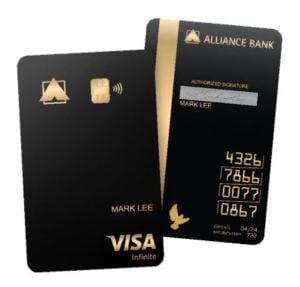 On the question of annual fees, the Alliance Visa Infinite is also now more accessible with the fee being lowered from RM800 per year to RM438 (waived for the first year). Similarly, the minimum spend requirement for subsequent annual fee waivers has been lowered, too. Cardholders only need to spend RM12,000 in a year to qualify for the waiver instead of the RM30,000 previously.

The Alliance Visa Infinite has had a permanent spot on our best air miles credit card list, due to its attractive air miles conversion rate for overseas spend at 5x TBP. Given the addition of the 8x multiplier for the versatile category of online shopping and e-wallets (and to some extent, the new 5x TBP for groceries too), we’re excited to see how the revamped Alliance Visa Infinite will blow the competition out of the water with its new air miles conversion rate. (It’s also worth mentioning that Alliance’s Timeless Bonus Points never expire.) Stay tuned to our blog for our in-depth review on these two credit cards coming up soon.