With just a couple more days to go, Chinese New Year is so close we can almost taste the anticipation in the air. Sure, the reimplementation of the movement control order (MCO 2.0) means we will miss out on some favourite activities – such as visiting relatives who keep asking about your plans for marriage or having (more) kids – but there is plenty that you can do to keep the festivities going!

Unquestionably, the custom of receiving ang pows sits pretty high up on the list of things that make Chinese New Year awesome! And this year, with many families being unable to meet up in person to celebrate, many banks and e-wallet service providers are advocating for e-ang pows to help keep the tradition alive. Here are some that you can check out! 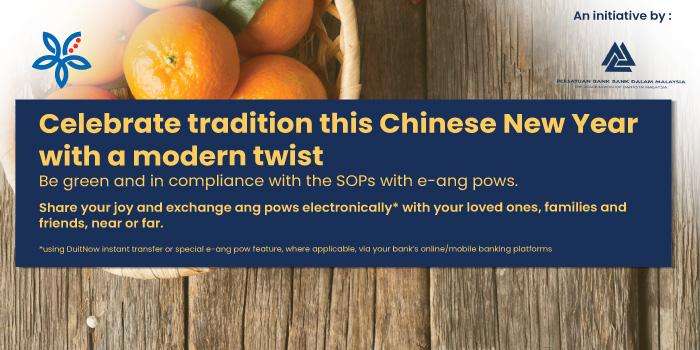 Affin Bank has tapped into a festive Go Green Campaign by the Association of Banks in Malaysia (ABM) to encourage the use of e-ang pow this Chinese New Year. The bank urged customers to celebrate tradition “with a modern twist”, using DuitNow instant transfer or the special e-ang pow features via your bank’s online and mobile banking platforms to spread prosperity. The awareness campaign also appeals to the environmental-friendly and responsible side of you to go green and comply with MCO standard operating procedures (SOPs) with e-ang pows. 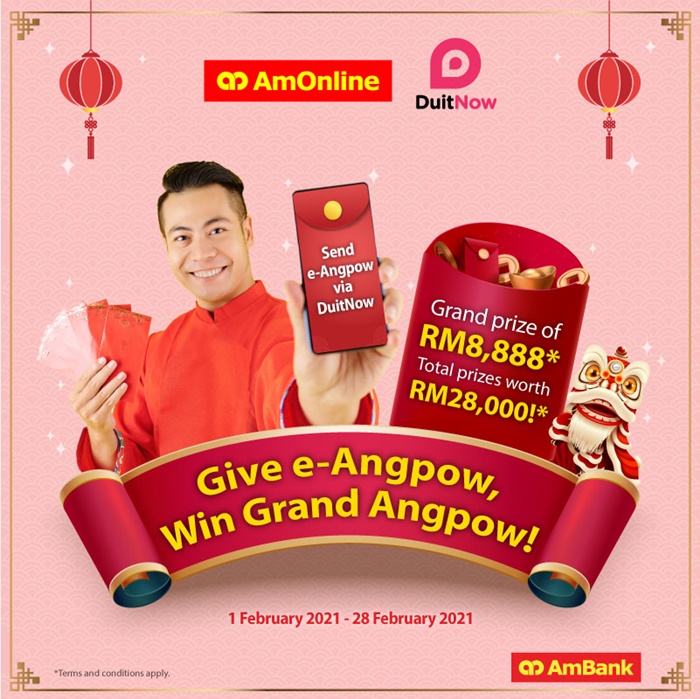 AmBank’s DuitNow Your Angpow campaign lets you earn chances to win weekly prizes worth RM888 or a grand prize of RM8,888 when you transfer at least RM5 to a unique DuitNow ID within the campaign month. Open to all new and existing current or savings accountholders (individual) who have registered for AmOnline, the campaign will see three winners being chosen for each week, and two for the grand prize, as can be seen in the following table:

There is no limit to the number of entries that you can earn, but each eligible customer is only entitled to win only one prize during the campaign period. All winners will be selected at the end of the campaign period via an algorithm system, after which they’ll be notified via SMS, phone call, or email within four weeks. Meanwhile, the cash prizes will be credited into the winners’ current or savings account within two working days after the announcement.

You can find out more about AmBank’s DuitNow Your Ang Pow campaign here.

Hong Leong has created a special tile for e-ang pow transactions in the main page of its Connect mobile app to help customers send their red packets more conveniently – complete with a Chinese New Year theme. Once you access the function, you will be given the ready option to transfer either RM1.80, RM8.80, or RM18.80. Alternatively, you can go for “Other Amount” if you prefer – after which you can just carry out your money transfers as usual. When you’re done, feel free to send the receipt of the transfer in the form of an exclusive e-greeting to the recipient! 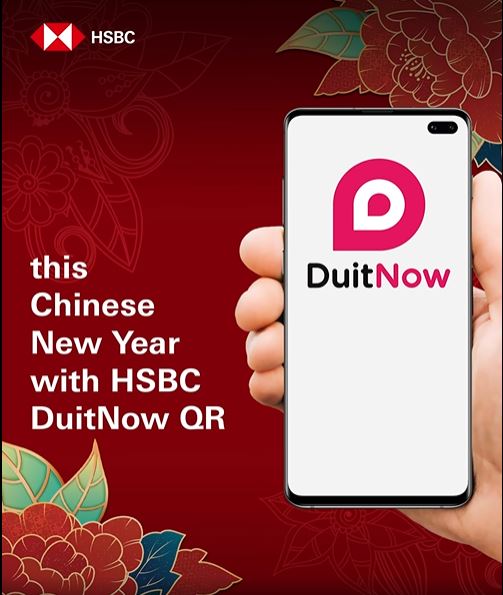 HSBC is also encouraging its customers to send e-ang pows via its HSBC MY mobile banking app with exclusive HSBC Chinese New Year e-receipts! To do so, you will need to scan your recipient’s DuitNow QR, obtained either physically or virtually. Here’s a video from HSBC with a step-by-step guide as to how you can do it:

Maybank’s All Sorts of ONG campaign offers customers the chance to win RM7 million worth of cash rewards and prizes when they carry out eligible transactions. Open to individual customers with a valid Maybank2u login, these transactions include sending and receiving e-ang pows from family and friends.

Essentially, each eligible transaction carried out during this campaign will earn you a number of entries to play the All Sorts of ONG game. The game consists of sorting out a variety of items into their respective categories within 30 seconds, netting you points to obtain prizes. Depending on how much points you are able to accumulate in your games, you can win single-game, weekly, and grand prizes.

You will be able to earn one entry to play the All Sorts of ONG game every time you send or receive a minimum of RM5 from your family and friends. You are allowed up to five transactions per action from each family member or friend, with no restriction on the number of individuals that you can transact with. These e-ang pows can be sent using either the Send Money or Scan & Pay function via e-Angpao in the MAE by Maybank2u (MAE) mobile app. Note that your funds for the Scan & Pay function must not come from credit cards in order to qualify for the campaign!

On top of that, do also be aware that while the All Sorts of ONG campaign is accessible via the Maybank2u app and website, the game itself is only available on the MAE app. All winners will be announced on the campaign page, whereas the prizes will be delivered according to their respective timelines and channels.

Find out more about Maybank’s e-Angpao effort and the All Sorts of ONG campaign on the bank’s official page. 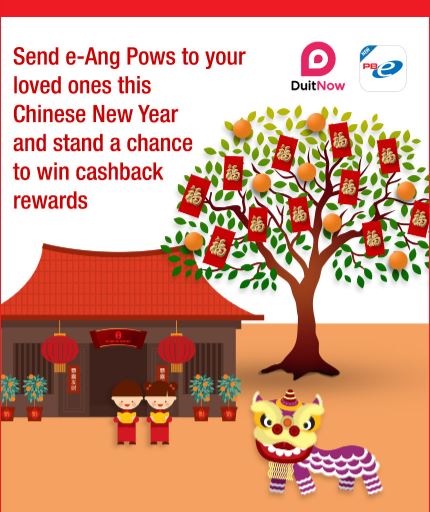 Public Bank, too, is having a DuitNow e-ang pow campaign that allows its customers a chance to win cash prizes of up to RM10.00 when they send an e-ang pow worth a minimum of RM10.

Open to all Public Bank personal banking customers with a PB engage account, the campaign will get you an opportunity to “shake” the Tree of Fortune after performing the required DuitNow transaction. Tap on the Tree of Fortune icon when it pops up in your app, and shake it until it reveals your prize! You will either receive a leaf (which means you get RM0), or an ang pow containing a cash reward that ranges from RM1 to RM10.

Note that each customer is entitled to a maximum of three cash prizes during the campaign period, and the prize allocation per day is as follows:

If you do win, the cash prize will be credited into your account by the end of the next working day. You can check out Public Bank’s e-ang pow campaign page here for more information. 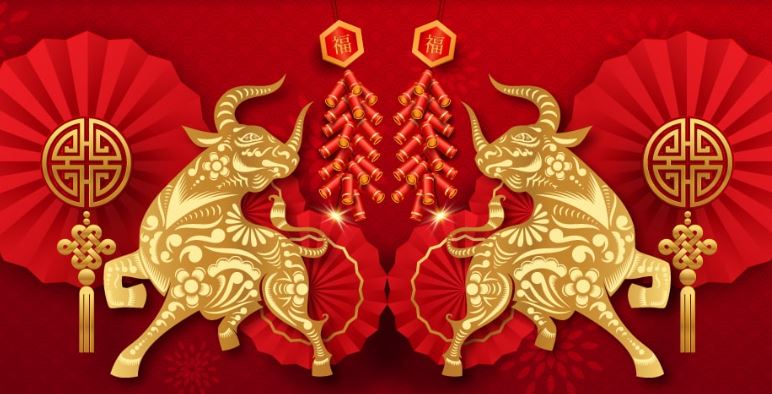 Standard Chartered’s ongoing Daily Double Ang Pow Cashback Rewards campaign will reward 12 lucky customers each day with 2x cashback when they transfer money to their family and friends via DuitNow. In other words, you stand a chance to win double the amount that you transfer during your transaction – capped at a maximum of RM100.

Each customer is only allowed to win one Daily Ang Pow, with a total of 384 winners throughout the whole campaign period. If you do win, your Daily Ang Pow will be credited to your bank account within 60 days after the end of the campaign.

Note, though, that this campaign is only open to new and existing customers who successfully applied for their Islamic (Tawarruq-based Islamic account) or conventional current/savings account during the campaign period.

Head on over to Standard Chartered’s website to find out more about its Daily Double Ang Pow Cashback Rewards. 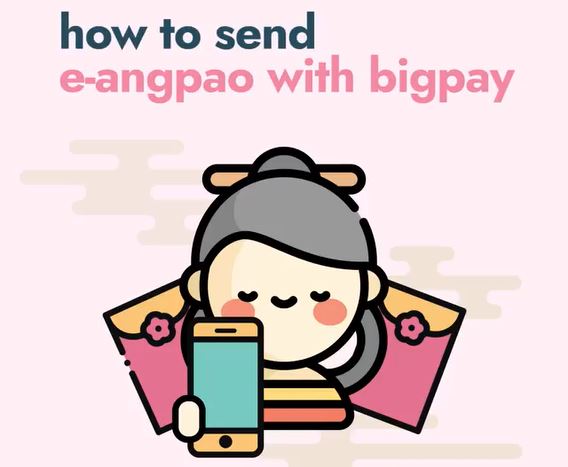 BigPay lets you conveniently send e-ang pows to your family and friends with a special Ang Pao tile in its app. You can also write your personal prosperity message to pass along with the e-ang pow, providing “digital prosperity” and festive cheer for your loved ones during this Chinese New Year amidst the new normal! Here’s BigPay’s video to show you how it’s done. 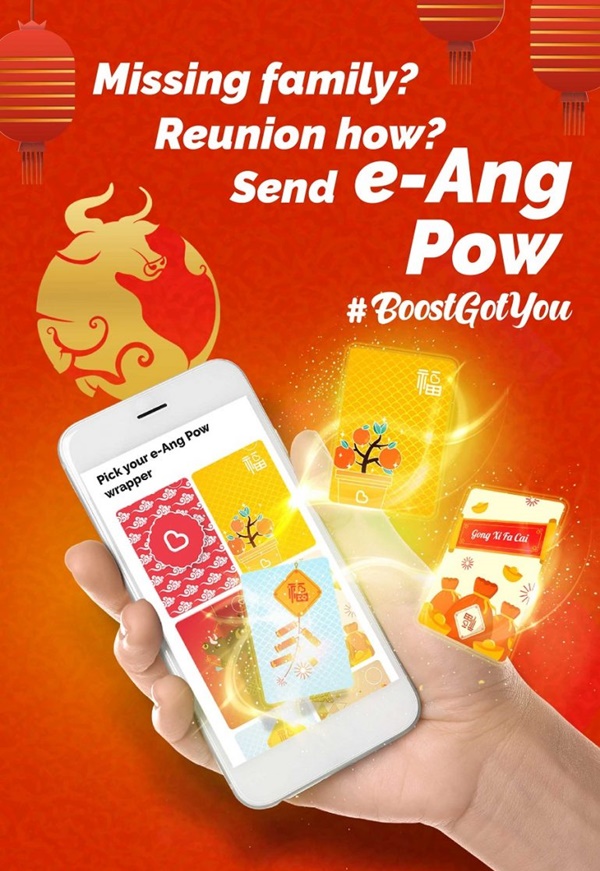 Boost has brought back its e-ang pow feature this year as well, allowing users to keep the tradition alive despite the physical distance. You’ll be able to choose from six different red packet designs when sending your e-ang pow, in addition to the option of including a personalised greeting as well. For convenience, the app also lets you send your customised e-ang pow to 10 people at one go, with the ability to vary the amount of money to each recipient.

Start sending your e-ang pow by tapping on the e-ang pow tile under the “What’s New” section! 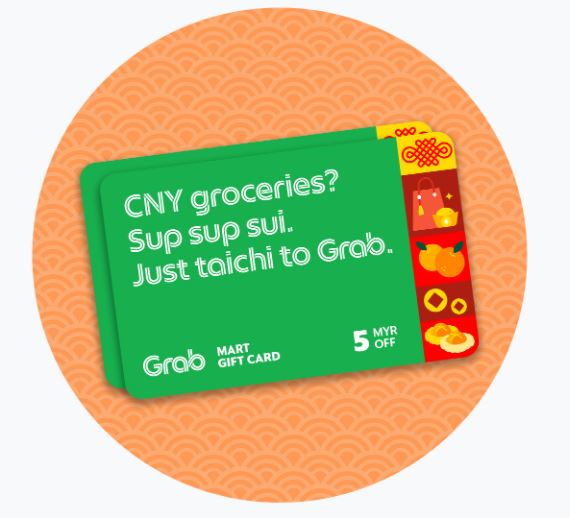 Grab is trying something different for its e-ang pow initiative this year; while you can still make money transfers via the GrabPay e-wallet, the tech giant is encouraging users to send e-ang pows in the form of GrabGift gift cards.

You can choose to purchase GrabRide, GrabFood, or GrabMart gift cards for your loved ones, with values ranging from RM5 to RM50 (for GrabRide and GrabFood), or RM10 to RM20 (for GrabMart). On top of that, you can choose from 15 designs for these virtual gift cards, along with a personalised message. 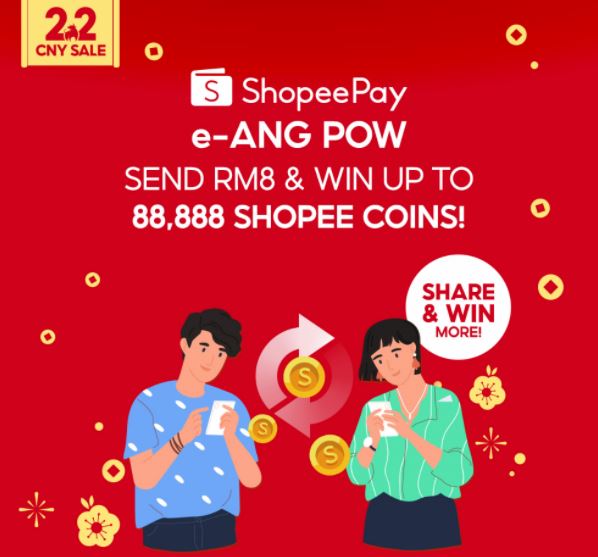 Shopee users will have a chance to win a guaranteed amount of between 8 to 88,888 Shopee Coins when they transfer a minimum of RM8 as an e-ang pow to their family and friends via ShopeePay. On top of that, you can earn even more Shopee Coins if you share your win on your Instagram feed.

Note, though, that you will be required to first verify your identity before you can make any e-ang pow transfers. Once you’ve done so, go ahead and send your e-ang pow – after which you will get to open a red packet containing either 8, 88, 888, or 8,888 Shopee Coins. You are only entitled to one lucky draw per day.

On top of this e-ang pow campaign, you can also win more Shopee Coins by sharing your win on your Instagram Feed, along with the hashtag #angpowshopeepay. Shopee will select 50 lucky winners after the end of the ongoing e-ang pow campaign to reward them with more Shopee Coins, although the amount has not yet been disclosed. These winners will be announced on 1 March 2021.

To take part in this e-ang pow campaign, head on over to the “Me” page on your Shopee app, and then tap on “ShopeePay”, followed by “Transfer”. 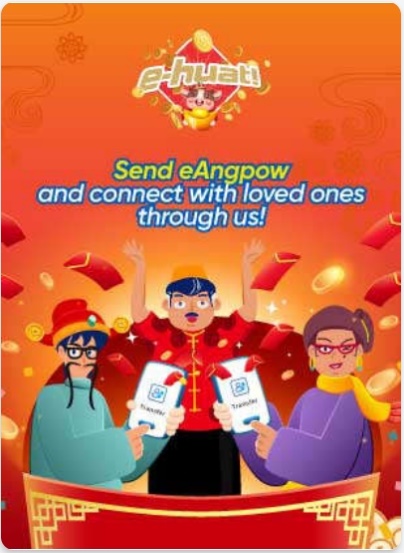 The E-Huat e-ang pow initiative by Touch ‘n Go eWallet this year is pretty straightforward; it essentially taps into the eWallet’s Transfer function to let you send money to your loved ones during this festive season. This offers both convenience and safety as you continue to uphold this age-old tradition of giving and receiving ang pow during this new normal.

As you can see, there are plenty of channels that you can opt for if you’d like to switch from gifting traditional ang pows to e-ang pows. Not only do these e-ang pow initiatives provide safety amidst the spread of the Covid-19 pandemic and the opportunity to bridge the physical distance during MCO 2.0, some of them also come with additional benefits and rewards.

However, if you’re one of those who still cherish the tradition of gifting physical ang pows and are able to do so during MCO 2.0, here is a list of banks that are offering fresh notes for your ang pows.

Until then, we at RinggitPlus would like to wish you a very Happy Chinese New Year, and stay safe!