Get the latest content and deals
Home e-wallet U Mobile GoPayz e-Wallet Expected To Launch In July: Here’s What It Can Do
ee-wallet

U Mobile will be the latest company to launch an e-wallet, and it will be called GoPayz. 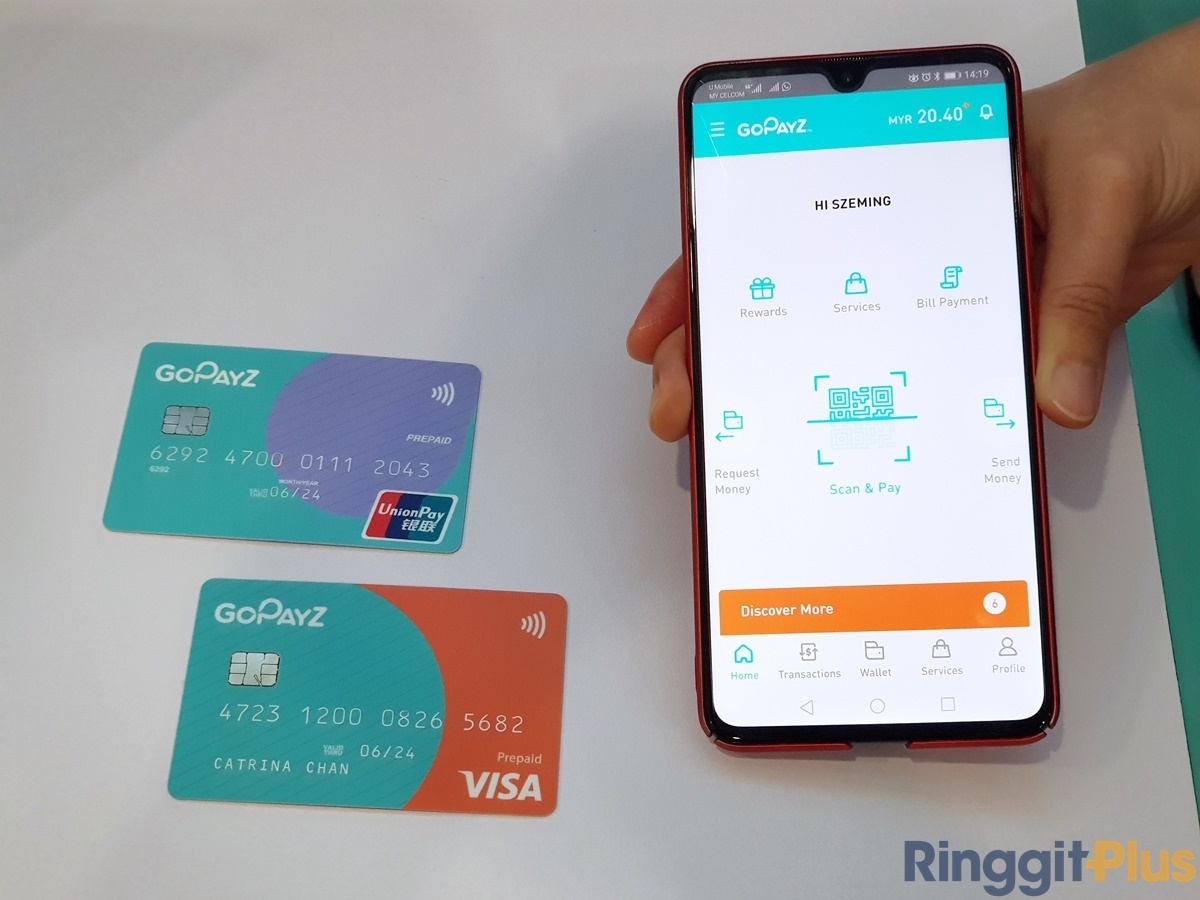 U Mobile will be the latest company to launch an e-wallet. Expected to be available sometime next month, U Mobile GoPayz aims to leverage on its existing platform and partnerships to be an “ecosystem player” – where GoPayz lives at the heart of it.

At a briefing with the media yesterday, U Mobile stressed that GoPayz isn’t just “another e-wallet app”, but rather an enabler into a larger ecosystem of services. GoPayz will not only support the usual e-wallet services, its merchant app GoBiz will unlock a whole suite of payment acceptance options at minimal cost, thus enabling even the smallest of retailers to accept digital payments (including credit cards). At the GoPayz and GoBiz showcase at the ongoing Malaysia Tech Week, we had an extended look at the GoPayz app and its offerings. Note that the app is still not in its final state, so the app may look slightly different when it launches next month. 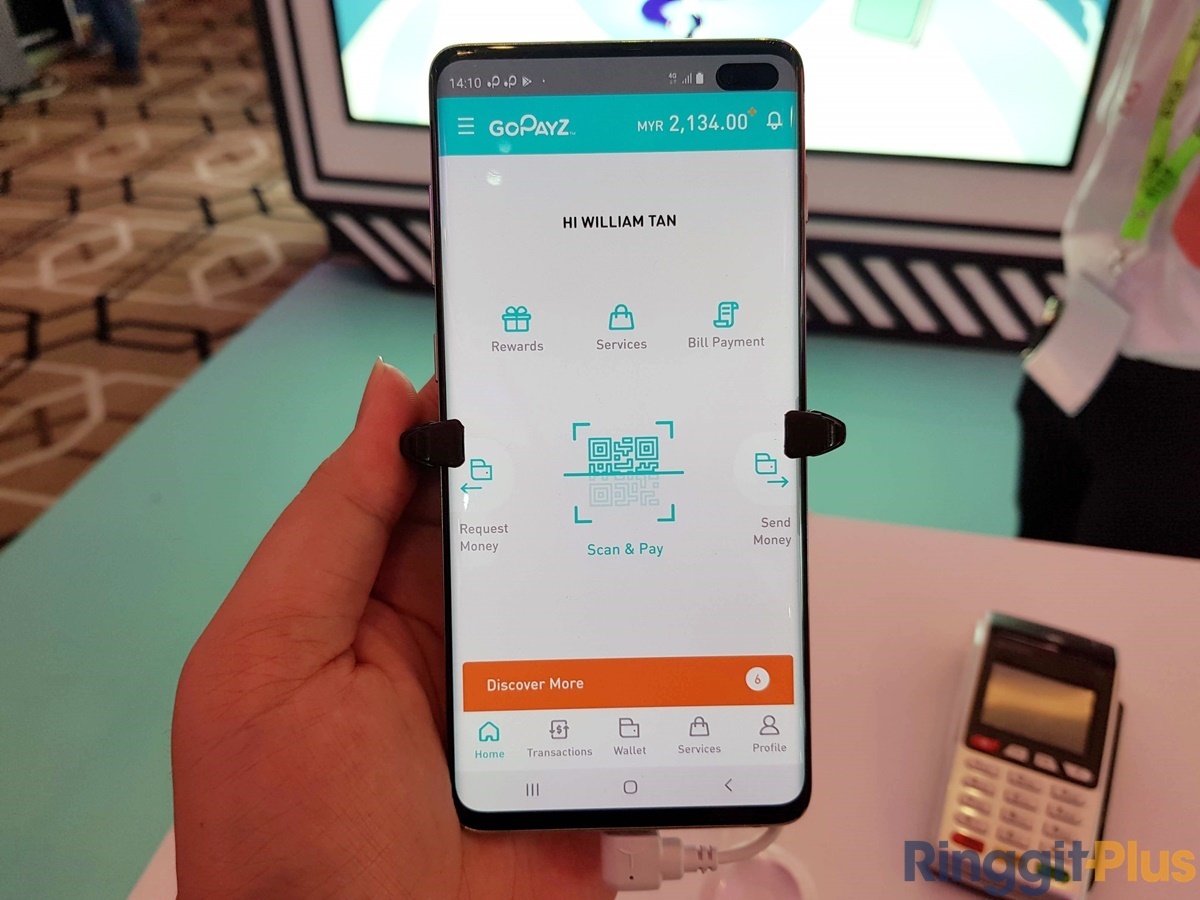 (edit: the interoperability agreement is not expected to be finalised when GoPayz is launched. GoPayz will leverage the huge merchant base that supports Visa, Mastercard, and UnionPay). In addition, GoPayz offers virtual and optional physical prepaid cards with a choice of Visa, Mastercard, and UnionPay variants, allowing it to be used overseas like AirAsia’s BigPay and the multi-currency Merchantrade Money prepaid cards.

The UnionPay prepaid card option is an interesting one, which means GoPayz may be used extensively in China. As for foreign exchange rates, GoPayz will follow the rates set by Visa, Mastercard, or UnionPay (whichever is used by the user), with zero extra fees.

Interestingly, GoPayz users can actually own all three physical prepaid cards if they so wished. However, each physical card must be applied individually via the GoPayz app, and has an estimated price of RM20 per card.

As for the e-wallet itself, it’s got a large RM5,000 wallet limit granted by Bank Negara Malaysia, which is one of the largest around (BigPay still retains the largest wallet size at RM10,000). Payment is made via QR codes and the virtual and physical cards. There’s also the usual peer-to-peer payments feature, and other services such as bill payments. Unlike most e-wallets, GoPayz can only be topped up via online banking (FPX) and debit cards – you cannot use a credit card to top up GoPayz. This is due to the existence of the physical prepaid card that can potentially be abused by some users, according to Albert Loo, head of digital financial services at U Mobile.

Speaking of which, funds in the GoPayz wallet can be withdrawn using the prepaid card at any local ATM at a charge of RM1, and overseas ATMs for RM10 (subject to additional charges by the local bank). Transactions made with GoPayz earns GoPointz loyalty points, which naturally can be used to redeem additional rewards. U Mobile says users may also receive “surprise rewards” for qualifying transactions. 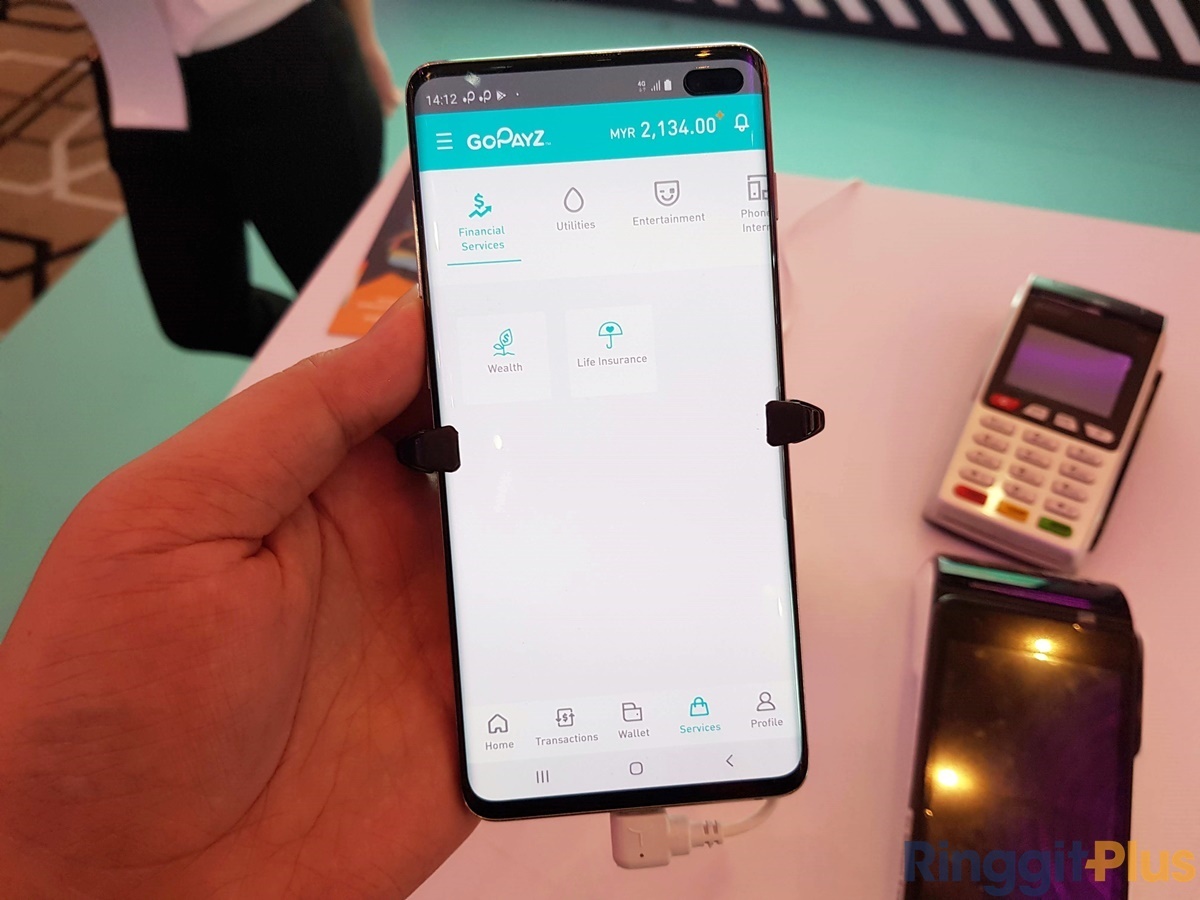 Like other e-wallet players, the payments feature is just one small aspect – the goal is to turn each e-wallet to a “super app”, allowing you to do basically everything within it. For GoPayz, U Mobile leveraged existing partnerships and forged new ones to make it a comprehensive offering. And of course, U Mobile also signed an MoU with Razer back in March for an interoperability agreement to allow GoPayz to be accepted at RazerPay merchants. 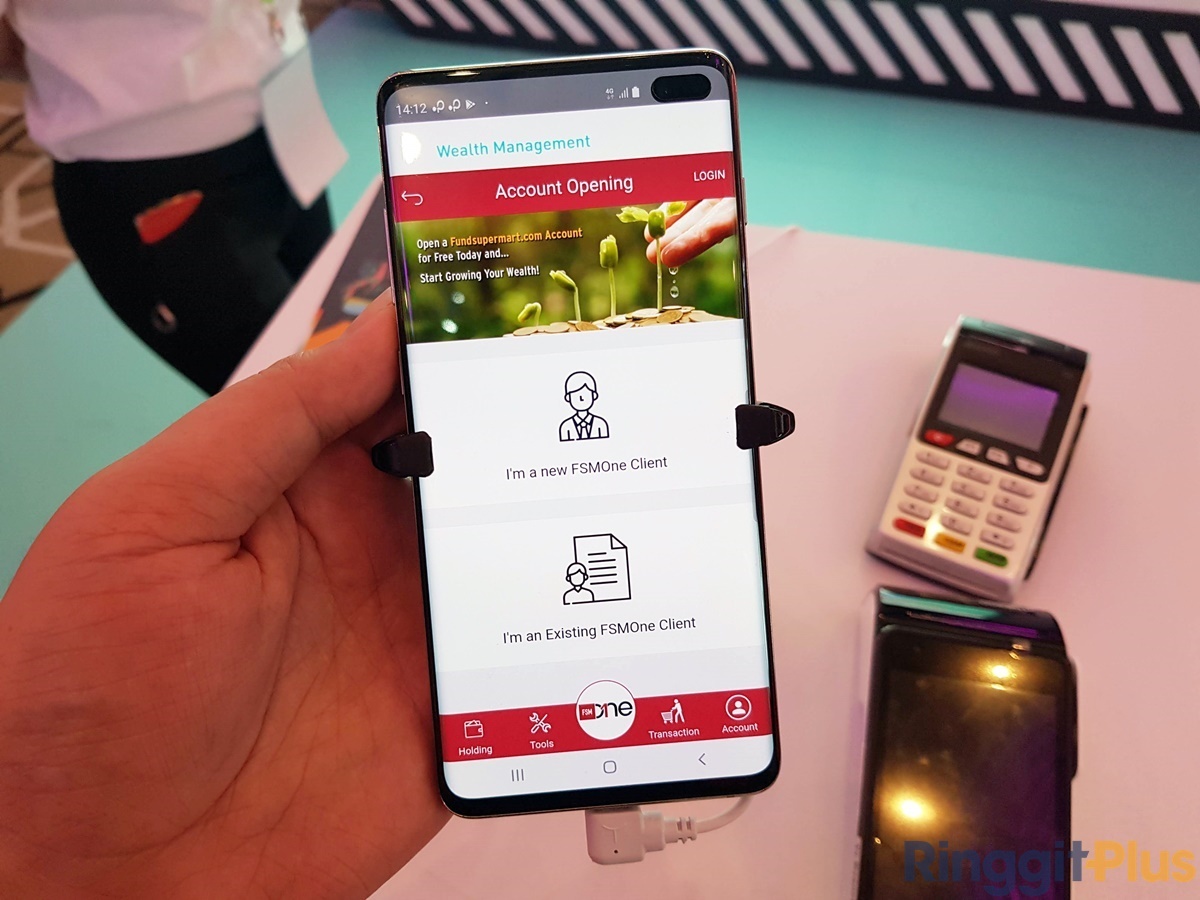 Finally, there’s also a partnership in place with MaxMoney, a currency exchange company. This allows GoPayz users to exchange currencies online at competitive rates without ever having to queue up at the money changer. Users can cut the queue and pick up their converted currencies at MaxMoney outlets. For a fee, MaxMoney’s ExpressDelivery feature allows users to get their converted currencies within 3 hours – and they even deliver to KLIA and KLIA2.

GoBiz – for all businesses, tiny or large 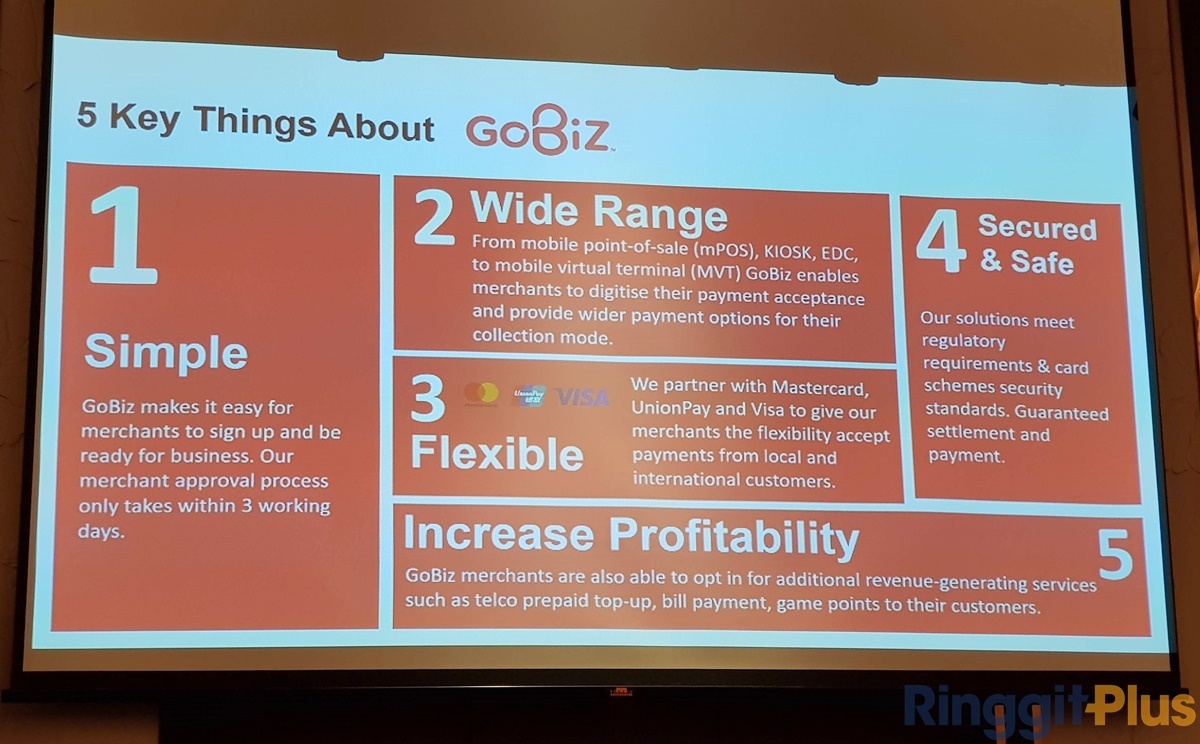 At the other end, there’s GoBiz, the digital payment acceptance platform for businesses. U Mobile claims that GoBiz will benefit all businesses, regardless of size, enabling all to accept digital and cashless payments at minimal cost.

According to U Mobile, GoBiz applications can be approved within 3 working days, and with customised solutions based on the size and scale of their business. And, thanks to its partnership with Mastercard, Visa, and UnionPay, GoBiz users have the flexibility to accept payments from both local and international users.

Finally, GoBiz merchants could also opt for additional revenue-generating services such as telco prepaid top ups, bill payments, and even game points which can all be done within the GoBiz platform. 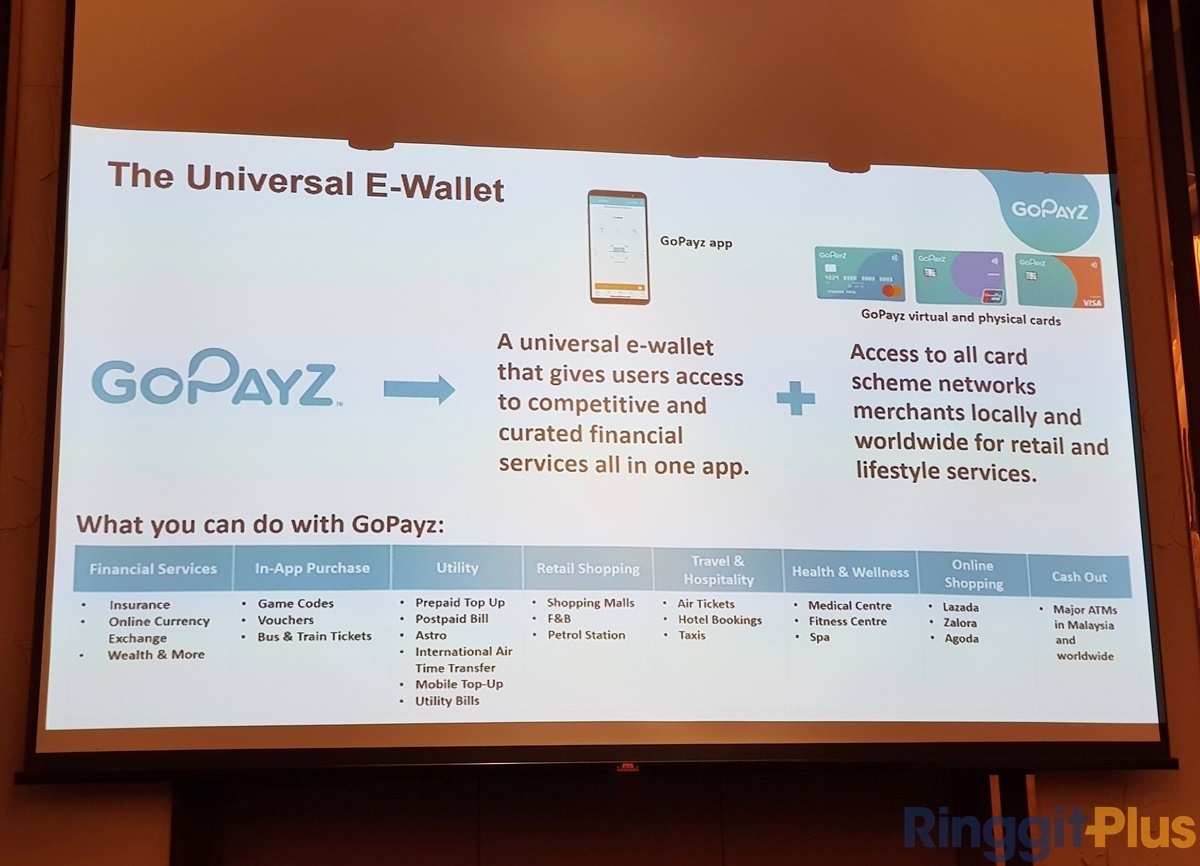 U Mobile has done plenty of work to establish key partnerships for an e-wallet that hasn’t even been launched yet. It’s clearly done a lot of research on existing e-wallets, identifying and plugging the gaps with its own GoPayz and GoBiz.

Its relationships with key partners certainly add value to GoPayz end users, though some may argue that other e-wallets are also doing the same. Ultimately the success of the ecosystem hinges on user acquisition and retention, which given the amount of e-wallets in Malaysia, will be no easy feat.

Read More
Malaysia Airlines (MAS) has announced that it will be extending the validity of Enrich Miles, Golden Lounge Access…
PPersonal Finance News

Read More
As of 28 August 2020, two million borrowers who could need help servicing their loans post-moratorium have been…
PPersonal Finance News

Read More
How will you know if someone is using your details without your consent? It can happen to just about anyone, so learn how to protect yourself against identity theft now!
ee-wallet

Read More
The Boost e-wallet app will undergo a system upgrade from 11.30pm on 10 June to 2pm on 11 June. Boost users will not be able to access the app while the upgrading takes place.
ee-wallet

Read More
How safe are e-wallets? Can your e-wallet be hacked? Are e-wallets better than physical cash? Let's answer these burning questions.