Apps
e-wallet
Are The New BoostUP Boost Coins Worth It? 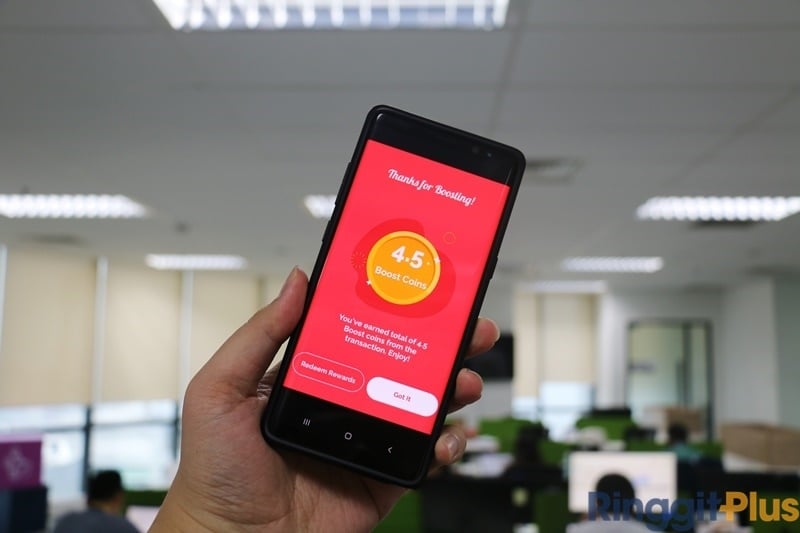 The new Boost loyalty programme, BoostUP, is all about the Boost coins. Users earn coins from every Boost transaction and occasionally from Shake rewards. These coins are then used to redeem gifts, vouchers, and cash from the new Boost rewards catalogue. The question is, how valuable are these Boost coins – and is earning and redeeming them worth your money?

We’ve already covered the basics of the BoostUP programme in our previous article – taking a look at how the points system works, the different member tiers, and so on. Right now, we’re going to deep dive right into the maths behind the Boost rewards redemptions so that you can see for yourself how valuable – or not – earning Boost coins really is.

What should you redeem on the Boost rewards catalogue? 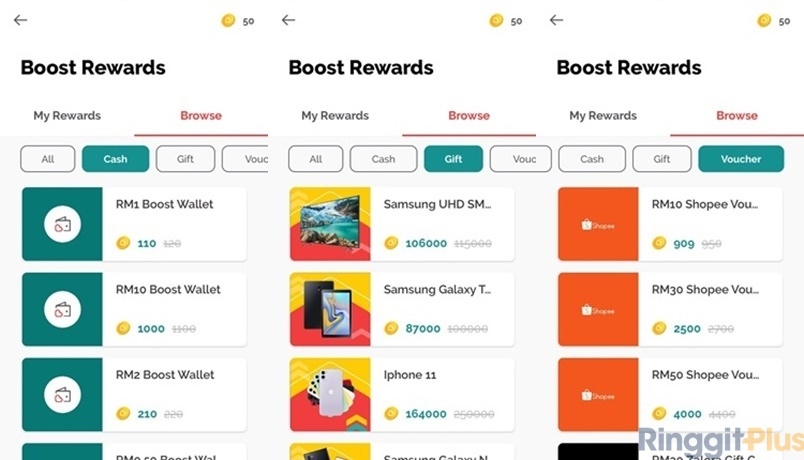 The Boost rewards catalogue allows you to use your coins to redeem cash for your Boost wallet, a selection of vouchers, and big-ticket gifts like electronics and gadgets. However, which item on the catalogue is the best value?

To make your life easier, we’ve calculated the redemption value of the entire Boost rewards catalogue so that you can see which is the best item to redeem. The higher the redemption value (in sen per coin), the higher the returns you get for each coin you spend – so these rewards are the ones that you would be better off spending your coins on. This is the same metric we used to evaluate the Grab Rewards catalogue recently.

Items are arranged in descending value

As you can see, with the exception of the Viu subscription and MBO vouchers, most of the highest-value redemptions you could make are the big-ticket gadgets and appliances under the catalogue’s “Prizes” section. The Samsung Galaxy Note 10+ would definitely be a prize to look out for, followed by the Samsung Ultra HD Smart TV and iPhone 11.

Surprisingly, redeeming cash for your Boost Wallet isn’t really the best use of your coins when you look at the redemption value offered; this is especially the case for the smaller Boost Wallet amounts. You would be getting better returns claiming vouchers on Zalora or Shopee instead if you wanted to get more value for the coins you spend.

How much would you have to spend to make the highest-value redemptions? 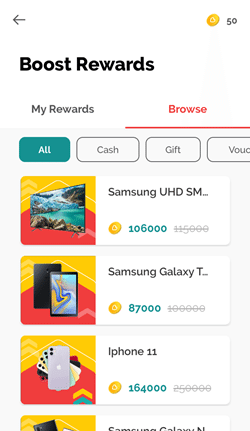 Now that you know which are the best vouchers to redeem from the Boost catalogue, the next step is to figure out how much you would have to spend in order to make those redemptions. As the earning rate for Boost coins differs according to your Boost level, we’ve broken down how much you would have to spend for some of Boost’s best and not-so-bad reward redemptions across the four different user tiers. We’ve also thrown in the calculated rate of return for these top rewards as well.

For the sake of comparison, if you were a GrabPay in-store Platinum user and wanted to use your points to offset some your purchase with Grab points (the closest equivalent of the Boost Wallet cash redemption), your rate of return would be a consistent 7.5% – that’s more than double that of the Boost Wallet’s cash redemption rates. Alternatively, using the right cashback credit card for your purchase would also almost definitely guarantee you a higher rate of return.

The big-ticket items in the rewards catalogue offer the best rates of return, with Level 4 Boost members able to hit at least a 4% return rate on their money. Meanwhile, most of the vouchers and the Boost Wallet cash options do not fare so well, offering less than 0.5% returns at Level 1 and not even reaching the 2.5% returns mark at Level 4. 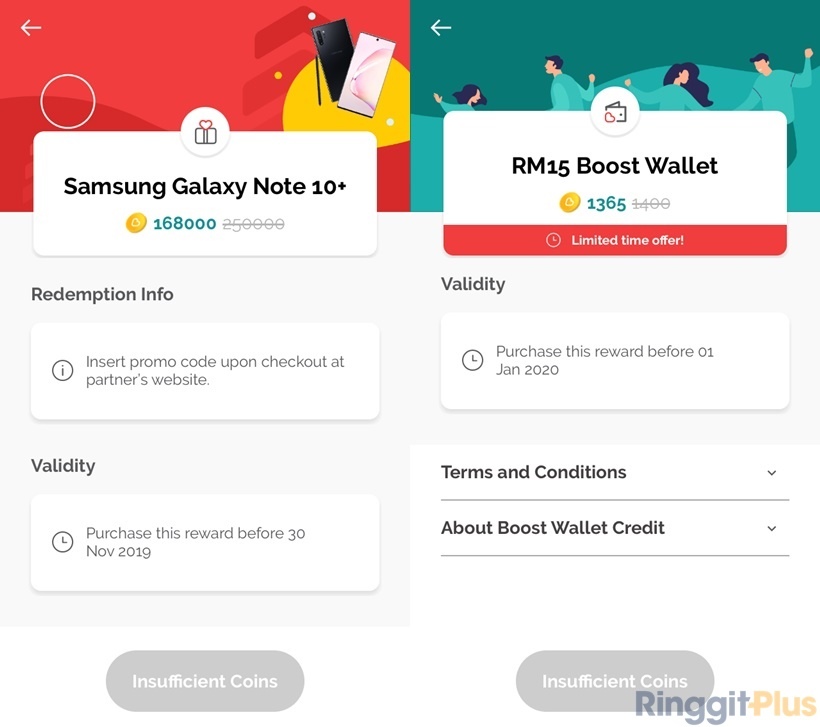 And yes, while the bigger prizes may offer you the best rates of return for your money, not everyone would be able or are planning to spend the amount of money needed to redeem them. For instance, the Samsung Galaxy Note 10+ will require you to spend RM84,000 to RM504,000 depending on your tier to redeem it. Sadly, even if you aimed to be far less ambitious and were just looking to get RM15 back in your Boost Wallet, you would have to spend between RM682.50 to RM4,095 just to achieve that.

And then there are the restrictions that you have to bear in mind when it comes to spending money on Boost. Boost coins have an expiry date of one year, so you would have to reach the required amount of expenditure for any one redemption within the span of a year. Furthermore, there is a RM1,500 limit for Premium Wallet users (Basic Wallet users only get RM200). Last but certainly not least, Boost  has a monthly transaction limit of RM4,500 per user. This makes spending enough money within a year to claim the Samsung Galaxy Note 10+ virtually impossible – without earning extra coins through other means like Shake rewards. And honestly, that’s when things get a bit messy.

Shake rewards – shaking up the calculations 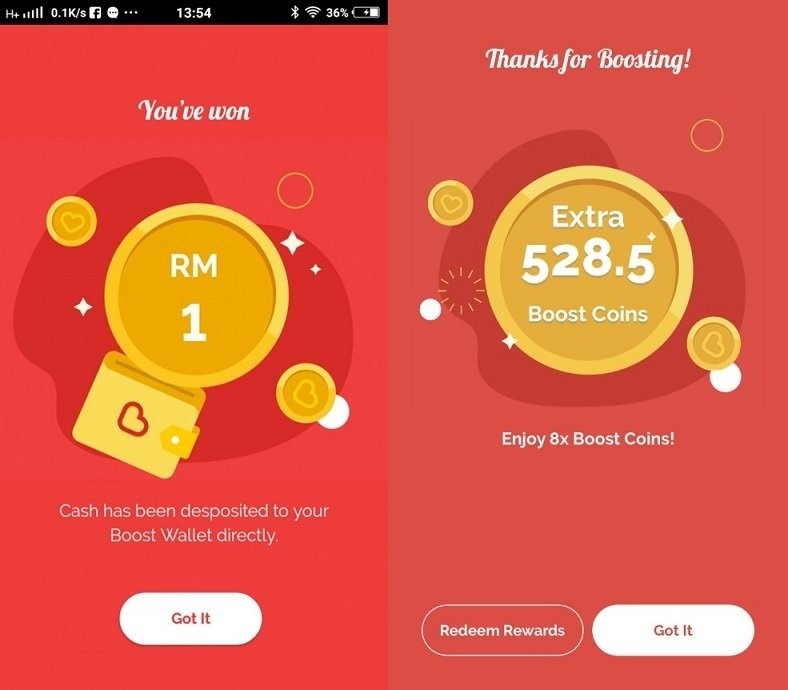 It is important to note that Boost’s Shake rewards add a completely random element to your returns. Despite BoostUP’s new structured system, the Shake reward you get alongside the coins for each transaction still retains some of its original element of surprise. Although higher-level Boosties stand to get bigger Shake rewards, the exact amount of cashback or coins you receive is still random.

This is what makes calculating your exact returns from using Boost a little bit more difficult; we’ve seen users receiving thousands of “extra Boost coins” in a single transaction that drove up the rate of return of close to 28%, and we have also experienced getting as little as 0 extra Boost coins from Shake rewards. And while we can’t confirm it, higher-tier Boost users appear to get better Shake rewards. Considering Boost tiers are based on both transaction amount and value, you need to spend a lot – almost exclusively – on Boost to achieve Level 4 in a month. Not to forget, because the Shake rewards are random, you can never know if that big-ticket purchase will yield thousands of extra coins or just a RM1 cashback.

While it’s no surprise that Boost decided to move to a more systematic (and sustainable) loyalty programme after a good two years in the market, some Boost users may find the new system a bit complicated in comparison to the old instant-cashback rewards. Not only that, the random nature of the Shake Rewards can mean your Boost transactions are either really rewarding or not rewarding at all.

Given that the other major e-wallet players, namely Grab and TNG eWallet, are rewarding users with all kinds of promotions on top of their base incentives, BoostUP’s gamification plus structured model on its rewards programme may put off a considerable amount of its user base who just want a simple, easy-to-understand rewards programme.

If you need a refresher on the more basic aspects of BoostUP, don’t forget to check our article on BoostUP.

Appreciate you to update the BoostUP Boost Coins topic. Readers and customers are spending based on the return rate with 1 year target in mind. But BOOST has removed all these high return value items for redemption since 2 months ago. Now their coins worth very little to nothing. Thanks.