Grab is once again holding its month-end GrabPay Power Up campaign, but this time, the tech giant is combining two standalone offers into one mega campaign that is very rewarding for GrabPay users.

On 28 and 29 April (that’s starting midnight tonight!), users be able to earn bonus GrabRewards Points just by topping up their GrabPay wallet. Meanwhile, on 30 April, users will be rewarded with up to 50x GrabRewards Points when they spend a minimum of RM180 with selected online merchants via GrabPay.

Each user is allowed one redemption per category, which means that you can technically earn up to 9,000 GrabRewards Points through this top-up perk (by topping up RM300 and RM500 in two separate transactions). As before, the Points will be awarded on a first-come first-served basis until the allocated cap has been reached.

That said, the campaign page states that only selected users are eligible for these top-up incentives, although it did not list out the exact eligibility criteria. Nonetheless, if you’ve been planning a big purchase using GrabPay, there’s no harm testing it out with one eligible top-up first – the points will be awarded instantly if you are eligible.

Considering GrabPay only awards points for spending with the GrabPay wallet, these bonuses are definitely generous. Taking the standard redemption rate of 800 points = RM5, you’ll be earning RM56.25 worth in GrabRewards Points just by topping up RM800 (in two transactions of RM300 and RM500) – that’s an immediate 7.03% returns, and you can earn even more bonus points on 30 April! 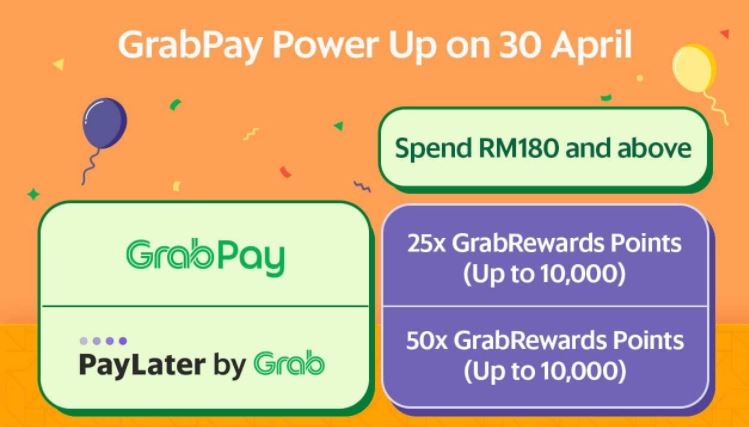 On 30 April, GrabPay users will be able to dip into the following “Power Up” benefits by spending a minimum of RM180 with selected online merchants:

Note that these bonus points awarded is on top of the usual points you earn – at Platinum tier you’ll be earning 3 points for every RM1 spent (which already yields a 1.875% return). The 25x bonus points earned is an additional 15.625% returns, for a total return of 17.5%. Add the 7.03% earned from the top-up campaign and you’re looking at an incredible 24.53% returns in GrabRewards Points!

The online merchants that you can spend with in order to qualify for this campaign range from fashion and personal care to groceries, F&B, and services. Some major names include Fashion Valet, Signature Market, BMS Organics, Domino’s, and Caring Pharmacy. The full list of eligible merchants can be found on the campaign page. Note that there are some merchants exempted from this campaign, including GrabGifts, FavePay, Carousell, FoneApp, Elinking, PosMalaysia, and all bill payments platform and/or insurance payment platforms.