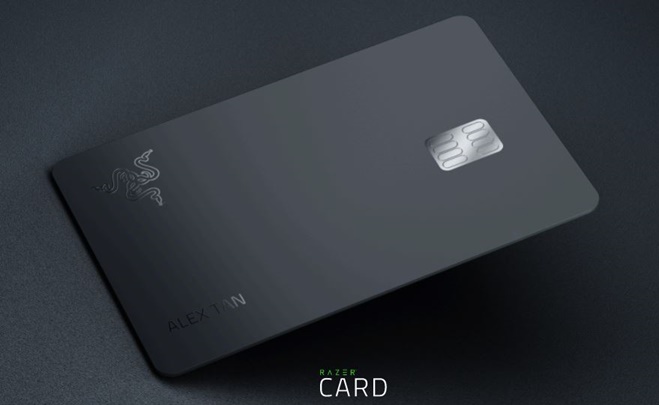 Razer has revealed its new Razer Card, a prepaid Visa card is linked to the Razer Pay e-wallet. In true Razer fashion, the Razer Card also holds the distinction of being the world’s first payment card that lights up when making payments (no RGB lights though).

According to Razer, the new Razer Card will be available in the form of a virtual card for easy online and mobile payments that’s accessible from the existing Razer Pay e-wallet, but there’s also the option to request for physical numberless cards for in-store contactless and chip transactions. The physical cards will draw funds from the Razer Pay e-wallet, and are available in two versions: the Standard Razer Card, which looks pretty sleek on its own, and the Premium Razer Card, which has the really cool feature of lighting up when you are carrying out transactions.

Here’s a GIF of how the light-up animation will look like on the Premium Razer Card:

Backed by global payments network Visa, the Razer Card’s launch has been a long time coming: Razer announced its partnership with Visa as far back as mid-2019, where it was already mentioned that a physical prepaid card was on the cards.

The Razer Card’s main benefit lies in its unlimited 1% cashback on all purchases with with no minimum spend and no cashback cap to boot. Additionally, cardholders get 5% cashback for RazerStore and Razer Gold purchases, although Razer Pay has temporarily bumped this up to 10% for the beta testing phase. RazerStore and Razer Gold are the company’s online platforms where gamers can purchase Razer gaming products and exclusive gaming deals.

Alongside the card’s launch is a gamified rewards programme for cardholders, where they can earn rewards for completing specific tasks: Pay tasks, Spend tasks, and Influence tasks. Pay and Spend tasks are tracked based on the number of qualified transactions carried out and the amount spent, respectively, whereas Influence tasks work like a referral programme, in which you get people to sign up for the Razer Card. Achieving these tasks will earn you tasks rewards; the more you achieve, the better your task rewards will be.

On top of the task rewards, Razer Card cardholders will also have a chance to win ultimate rewards and meta rewards. These rewards are awarded based on your rate of completion with regard to the pay, spend, and influence tasks. For instance, users who complete all pay, spend, and influence tasks will be entitled to an ultimate reward (worth S$749.90 during the beta testing phase).

For now, the Razer Card is only available to an exclusive audience of 1,337 Singaporean users who will be recruited through a beta testing programme. The beta phase will run till 31 December 2020 and officially launch in Singapore in January 2021. Interestingly, Razer also announced that the Razer Card will be expanded to other countries where Razer Pay is available – which includes Malaysia, where it was one of the first markets to launch the e-wallet.